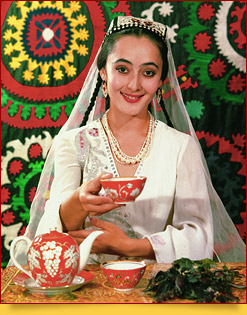 In Central Asia tea is something more important than a mere beverage to quench one’s thirst with. The long tea drinking process with but a few short breaks to utter a prayer, when ‘tea drinkers’ sit for hours with a piala (a small bowl) of hot tea in hand, talking, is a separate page in the book of the history of the unique Oriental Culture.

Tea opens and closes any meal, newcomers are often received with tea, and in the course of the day tea is often served between meals, each time newly made.

Tea is usually drunk from a piala, a traditional Central Asian cup in the form of a small bowl. Each guest is received with tea. To refuse to have a cup of tea is considered impolite. The number of bowls placed onto the table with the hot tea-pot is usually one point larger than the number of guests, the extra bowl used in kaytar, a special tea making ritual, consisting of three repetitive acts of pouring tea into the bowl and then back into the tea-pot. Thus the tea is stirred properly and becomes stronger. Tea is usually served together with oriental sweets, fruit and, certainly, with the traditional Uzbek bread.

If in an Uzbek house you discover that the tea-bowl you have been given is filled with tea less than by half, do not be surprised. It is a tradition, so that the guest can talk drinking hot tea without burning their fingers. As one talks, the tea in their bowl cools very soon, while the etiquette requires drinking up the whole bowl. This tradition helps facilitate the whole process: you do not need to stop talking, you always have hot tea in your bowl, while your lips and fingers do not burn from the large amount of tea in the bowl. Thus, if you happen to distribute tea in a Central Asian house, remember this tea drinking rule and never pour more than half of the bowl of tea (this is called ‘treat with respect’ among people). If you pour a full bowl of hot tea to someone, the person may feel offended. The person distributing tea takes one piala with his hand, pours tea into it and offers it 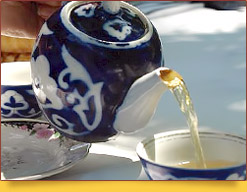 to one of the guests. Then he takes the next one and so continues until all the guests are provided with tea. There are no special rules as to how to hold a piala, so you can do it in whatever way you like. At a women’s tea party tea is distributed by the hostess or her daughter-in-law, in a men’s company it is done by the host, while at a public tea house the youngest person is the one who pours tea.

Drinking tea is particularly popular during chilla. ‘Chilla’ is the hottest period in mid-summer consisting of 40 days, from late June to early August, when the temperature rises to +40°С and higher. At this time it is recommended that people avoid direct sunlight and drink as much green tea as possible.

Tea became the favourite beverage in the East long ago. It was being transported along the Great Silk Road (Route). It took a long time to bring tea from foreign countries, and so it was very expensive in Central Asia. Authentic tea was often substituted by various herbs and the roots of plants, often compressed into small cubes. 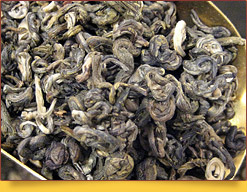 Since ancient time and to the present day the tea house (choykhona, chaykhana) remains the main place where people meet, rest and talk. The choykhona is not a mere tea house where people come to drink tea and have a snack. Long ago the choykhona became a place where people gathered to tell their stories and listen to the latest news and gossips (those times knew no newspapers or telephones), to discuss leisurely their plans for the future with their friends, to play backgammon with their neighbours, to carry out serious business negotiations or to celebrate an important event. The choykhona was regularly attended by people living in the neighbourhood, and if a traveller happened to call at the place, the evening became very special, as the pilgrim could tell so much about faraway countries and how different was the life of people living there!

It should be noted that tea houses in the east are conventionally visited by men, and in former times it was a very strict rule, a woman coming to the place being considered to have an indecent behaviour.

Tea houses appeared in Central Asia together with tea, bazaars and caravanserais. Like today, they were of different categories, from small rooms to respectable many-roomed buildings with music and dances. 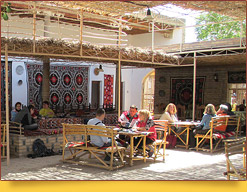 At the entrance the visitor was to take off his shoes and go in bare-footed. The choykhona usually had a clay floor covered with felt. The visitors usually sat down on the floor in a characteristic cross-legged position. Those occupying the the large wooden beds (takhta) could maintain a more comfortable posture, half lying on mattresses (kurpacha) at a small tablecloth (dastarkhan).

Dear guests! Be sure to visit an authentic choykhona in Central Asia! There, sitting with a bowl of green tea in hands at a dastarkhan with oriental sweets and fresh fruit, you can fully feel the oriental atmosphere and perceive the true meaning of the tea drinking tradition and eastern hospitality!