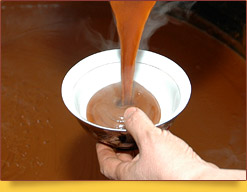 Sumalak (a wheat bran pudding) is a dish cooked exclusively for spring festival of Navruz and thus available for tasting only once a year. Sumalak is very tasty, invigorating and restores one’s strength lost in the course of the winter.

Today we do not know exactly who was the first to cook this ritual dish based on sprouting wheat grains and when they did it. Nevertheless, every year in the last days of March all regions of Uzbekistan witness the appearance of huge cauldrons in the streets and in courts together with great numbers of people talking merrily and dancing around them. This is ‘Sumalak sayli’ (the sumalak holiday), which calls people to friendship, fraternity and cooperation.

The process of cooking sumalak is an interesting ritual, which aims not only to prepare a tasty meal, but also to foster mutual support and unity. Traditionally this was the time when grains of wheat were put into soil, some part of which were reserved for the cooking of sumalak, the main dish of Navruz. Each family put their share of grains into the cauldron, bringing a handful of sprouting grains to where people were boiling sumalak all together. 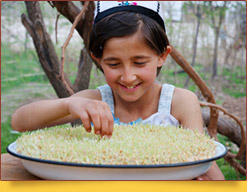 Ground and pressed, the sprouting wheat grains ooze whitish liquid, which is afterwards mixed with boiling oil and flour. But before pouring oil into the cauldron, its bottom is covered with small pebbles, which are conventionally collected by children. The pebbles do not allow the sumalak to get burnt and make it possible to maintain an optimal temperature during the whole process. However, they have their mystic meaning. So, a person who is happy to receive one of the pebbles during the distribution of sumalak may make a wish and leave the pebble to them as a talisman.

In the course of the cooking the sumalak must be constantly stirred with a large spade-like skimmer. It is rather difficult to stir the viscous substance for 24 hours running, which is why the process involves quite a lot of people who substitute for one another at the cauldron. This is where the tradition of preparing sumalak with the participation of a whole mahalla (block) or street has grown from.

Another interesting custom is to interpret the meaning of the image that is formed under the cauldron lid on the surface of the sumalak after the fire has been put out. 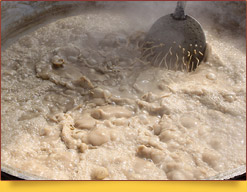 It is traditional to listen to music, sing songs and tell children legends about the appearance of the dish while cooking sumalak. The story about a poor woman who once lived in a small village on the bank of the Jayhun (the Arab name for the Amudarya) seems the most wonderful. Her husband had died and the woman was bringing up her seven children by herself. One year, when the harvest was very poor, the family did not have enough food for a whole winter and had to starve. The little children were unable to understand why their mother did not feed them and were constantly begging her to give them food. The poor woman was watching with pain how her children were growing weaker from hunger day after day. When the children became so weak they could not even get up, the woman told them she was going to make some tasty meal, which she did in order to ease their sufferings. Then she took the largest cauldron they had, poured some water into it and dug out a handful of wheat grains, which had fallen onto the floor and given sprouts. She put them into the cauldron, too. The woman began to stir the substance and, smiling to the children, was saying that the meal in the cauldron was very tasty and in several minutes they might sit down at the table. When somebody of the children asked if they had to wait long, she answered that she was only to add meat and boil it a little. In saying this she would put several stones into the cauldron and made the children believe they were meat, so that they could continue to wait and struggle. 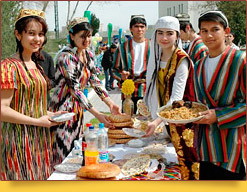 She kept on cooking for the whole day and the following night, and fell asleep when the new day was about to break. She slept only for several minutes, and when she awoke and opened the cauldron, the poor woman found it filled to the edges with warm brown substance, on the surface of which she saw strange images resembling wings. The woman realised that, while she was asleep, their house was visited by angels, who filled her cauldron with unusual food giving strength and consolidating spirit. The woman fed her children and then started to distribute the sumalak among the neighbours, who were also starving. Soon they did what she had done, and also obtained tasty sumalak, which they immediately gave to other people, helping each other survive through that terrible winter.

Nowadays this custom of sharing sumalak with neighbours and friends right after it is ready still exists. There is also a belief that if one tasted sumalak from seven cauldrons in one season, they would become happy. And the fact that most of the people manage to do it indicates that, like in the old times, people readily share what they have - the happiness of living, receiving the spring and celebrating Navruz - with their neighbours, relatives and friends.