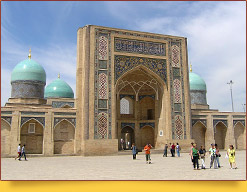 A walk around the Old Town in Tashkent is a bit like traveling back in time - labyrinths of narrow streets, low buildings, famous mosques and madrassas. But if you really want to dive into the past, look in the Khast Imam Square in Zarqaynar Street to the east of Chor-Su bazaar. Here is the famous Barak-Khan Madrasah.

Barak-Khan Madrasah was built in the XVI century by order of the governor of Tashkent, Nauruz Ahmad- Khan a grandson of Mirzo Ulugbek. The governed considered Nauruz Ahmad-Khan ruler accompanied by good luck, that is why they nicknamed him "Barak-Khan" or "Lucky ruler." Since then madrasah is called by the nickname of its founder. Construction of madrasah was built in several stages and was completed in 1532. The building Barak-Khan Madrasah was erected in front of Mahalla Hastimom, considered the center of scientists, philosophers and scholars of Islam. For more than five centuries, Barak-Khan Madrasah symbolizes the greatness of the city's history. Until 2007 it housed the Spiritual Administration of Muslims of Central Asia.

History
The construction of Barak-Khan Madrasah connected with cultural and political changes that arose in Movarounnahr at the beginning of the XVI century. Earlier the great cultural figures, poets, painters, miniaturists, dancers, musicians, architects and philosophers preferred to live and work closer to Herat, next to their patrons - Sultan Husayn Bayqarah and Alisher Navoiy, but in the first half of the XVI century, the situation changed and, Samarkand, Bukhara and Tashkent became the centers of culture. All artists rushed to the palaces of new patrons, who might not be as sincere in their motives as Husayn Bayqarah or Navoiy, but seeking to keep pace with the nonpareil. During this period, in the reign of the dynasty Sheibanids, a court architect, whose name is unknown, built Barak-Khan Madrasah in Tashkent. 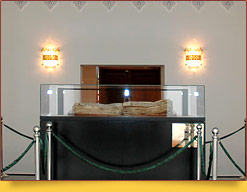 Opposite Barak-Khan Madrasah, in a museum specially built in 2007 on the place of former Mui-Mubarak Madrasah the famous Muslim relic is resided – the Koran of Caliph Osman or the Ottoman Koran written in the VII century and considered the primary source of the holy book. According to a legend Caliph Osman was killed while reading this book and it has drops of his blood, this is why the book was considered holy and was kept at court of the caliphs. For a few centuries the Koran of Osman was in the caliphs’ treasure in Medina, Damascus, and Bagdad and got to the Central Asia during the reign of the Timurid dynasty. There is a theory that the Koran of Osman was brought to Movarounnahr by Amir Timur, in any case, it is known that in the XV century it was at the court of Mirzo Ulugbek in Samarkand. When the Central Asia territory was conquered by the Russian Empire, the Koran of Osman was taken to St. Petersburg where it was before the revolution. In 1924, the relic was returned to Uzbekistan and was resided in the History Museum of the Peoples of Uzbekistan for a long time, and then at the end of the twentieth century on the initiative of the President of Uzbekistan, Islam Karimov, it was handed to the Spiritual Administration of Muslims of Uzbekistan. 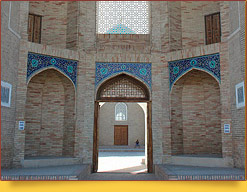 The main portal of the complex is decorated with unique mosaics and paintings. Barak-Khan Madrasah includes also two built-in mausoleums. But, the mausoleums were built before the construction of the madrasah. Untitled mausoleum is located in the eastern part of the architectural complex; the second mausoleum-khanaka with two domes was built on the place of burial of one of Tashkent's governors - Suyundzh-Khan, a descendant of Mirzo Ulugbek. Untitled Mausoleum was originally built for Barak-Khan, but he died in Samarkand, where his ashes rest.

Barak-Khan Madrasa was badly damaged after the earthquake in 1868; many buildings were subjected to restoration. In the 60-s of the XX century within the framework of the project on the preservation of historical and architectural monuments in the cells of madrasah there were opened craftsmen's workshops. Their products - patterned plates, elegant business card holders, cigarette cases, silk scarves, forged products and jewelry can be bought without leaving the complex. 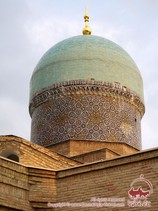