Tashkent (‘a stone city’; also spelled Toshkent), Uzbekistan’s capital, is in all respects a Central Asian regional hub; it is the fourth largest CIS city with a population of around 3 million. Today it has all the features of a modern metropolis and a capital, with a lot of attractive Central Asian-style newly-built structures and sites, as well as Soviet-era buildings. Tashkent is rich in museums, theaters and concert halls; there are a lot of traditional Central Asian and European-like restaurants and clubs, and several very nice parks, including a zoo and a huge botanical garden. Tashkent is the only Central Asian city which has an underground railway system (Tashkent Metro). It is probably one of the world’s most beautiful: its stations are real works of art, each featuring unique designs covering various themes, such as famous people, events, valued notions, terms or just common nouns. Tashkent is a city of wide streets and numerous avenues, and is abundant in trees; although it is located in Central Asia, it has recently had a lot of evergreens planted, in addition to its traditional planes, poplars, oaks, willows, etc. Tashkent looks modern - it grew to its present size mainly during the Soviet times - but it is over 2,000 years old, and there is still some of its old part surviving, called Old City or Old Town. Tashkent Old city features a huge traditional Central Asian bazaar (there are many large and small bazaars in the city; most farmer products in the city are sold through them, not through stores), as well as several Islamic architectural monuments and quaint adobe mahalla neighborhoods, quite worth visiting for their charm. 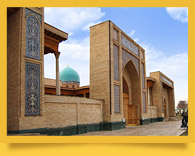 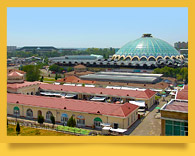 The old bazaar Eski Juva (‘old tower’), better known as Chorsu (‘four courses’; also spelled Chor-Su), is located in Tashkent Old City at a crossroads of four roads. It features an abundance of colorful and exotic merchandise, and, though thoroughly restored and renovated, the fascinating aura of old-time Asia and folklore all year round. It is one of the oldest Central Asian bazaars; it was known as far back as the Middle Ages as an important Silk Road destination. Just imagine yourself walking about this bazaar a few centuries ago - past merchants, packed camels, artisans, shops, shoppers. Today it is almost the same.

Copyright © Central Asia Travel
All rights reserved. No part of these publications may be reproduced without written permission of the copyright owner.