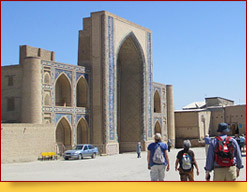 Ulugbek (also spelled Ulugh Beg, Ulughbeg, Ulugh-Beg), Tamerlane’s grandson, was an enlightened and intellectual ruler. He was very much concerned with development of science in his large kingdom. Besides the well-known madrasah in the Registan Square in Samarkand and the madrasah in Gijduvan (Uzbek: G'ijduvon; also spelled Gizhduvan), he ordered that one be built in conservative and strict Bukhara, the Islamic capital of Central Asia, in the hope the city would become a center of science and education as well. Ulugbek Madrasah in Bukhara was for a long time followed as an example by builders of Islamic schools in other Central Asian cities.

The madrasah was built in 1417 by Ismail Isfagani and Najmeddin Bukhari, the best architects of the time. The structure shows harmonious proportions and forms of its elements; it has little decoration and yet looks impressive and even majestic. It is a rectangular building with a large portal and a courtyard. It features an entrance corridor splitting and leading in two directions: to the mosque and darskhona classroom. This was against the common design of madrasah corridors, which led right into the yard. 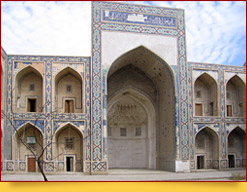 The gate of the madrasah has a carved inscription taken from the Koran: ‘The pursuit of knowledge is the responsibility of every Muslim man and woman’. This citation can be considered to have been Ulugbek’s motto. There was also another inscription:‘May the door of God’s blessings be every day open to the people who are aware of book wisdom’.

Ulugbek was famous for his astronomical researches throughout the world. That is why astral designs in the decoration of the madrasah predominate. Some decorative elements differ in the ways they were made, which is evidence of the fact that the madrasah has been restored several times.

Ulugbek Madrasah could seat up to 80 students. They studied Astronomy, Mathematics, Arabic and religious subjects. Many graduates from the madrasah became eminent scholars and poets.

The madrasah is one of most outstanding Bukhara architectural monuments. Thousands of lovers of Central Asian culture visit it every year. Today the madrasah houses Bukhara Restoration History Museum. 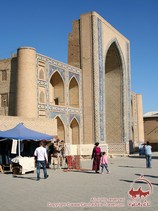 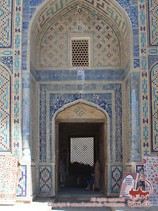 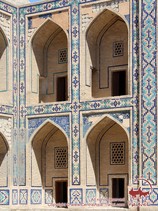