It is impossible to think about Asia without bazaars - just like the sky without moon or a teahouse without tea. Asian bazaars were the Great Silk Road crossroads stars, cultural melting pots. They were not only trade locations; they were centers of attraction and development of various cultures, interaction of peoples, exchange of ideas and languages. Asian bazaars - like the crystallized grape sugar navat - are the locations where the nation’s soul is concentrated. Their facets reflect the gist of Central Asian life and existence.
Uzbekistan bazaars differ in designs and layouts. They are open or roofed, with parallel, perpendicular, round rows of stalls, or one-line rows along a city’s major road or a river. The sale spots are as various as cloths on the ground, stalls and shops, and even luxurious illuminated shop windows for some of them.
Only in Asia you can see how one of the oldest economical principle saying ‘trade is the engine of civilization’ works. Besides anything else, the key to start this engine is bargaining. You can take an active part it; bargaining is always welcome. It is bad manners to shop at a bazaar without bargaining. One Thousand and One Nights Sheherazade still holds a lot of miracles in store for you. Asian bazaars is one of them. 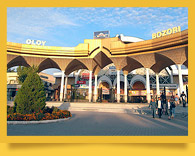 Thanks to its impressive main entrance and overall appearance, Oloy Bazaar is often showed in Tashkent sights photos. Oloy Bazaar was opened in the 1870s. It was named Oloy then after the Turkic word oloy meaning ‘a soldier’. So it was ‘a soldier bazaar’ where clothes and other man-made things were sold. The main entrance to it looks grand and has beautiful designs. The first part of the bazaar is a two-storey pavilion with boutiques, souvenir and jewelry stores selling local and imported merchandise. It is somewhat dark inside because of the dark-green roof and dimmed light in the stores and passages. 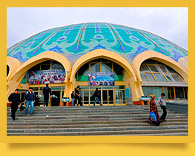 The old bazaar Eski Juva (‘old tower’), better known as Chorsu (‘four courses’), is located in The Old Town at a crossroads of four roads. It impresses its visitors with its colorful merchandise, buildings, and atmosphere of the distant past and folklore all year round. It is one of the oldest Tashkent and Central Asian bazaars; it was known as far back as the Middle Ages, and it was an important part of the Great Silk Road. Today’s Chorsu Bazaar has, of course, been thoroughly renovated; a lot of new rows of roofed stalls and stores have been built. However, the bazaar still retains the fascinating aura of the old-time Orient. 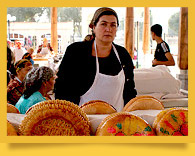 Siab Bazaar in Samarkand is still as impressive as it was many years ago. Its abundant produce and handicrafts is evidence of the natural wealth of Uzbekistan and its people’s talents and diligence. Siab Bazaar is located not far from The Registan Square, near Bibi-Khanym Mosque and Shakhi-Zinda Necropolis. The entrance to the bazaar is a high arch decorated with blue and dark blue mosaic at the top. Once you are inside, you find yourself among many colors, scents and sounds. Samarkand Siab Bazaar is like Chorsu Bazaar in Tashkent. Both of them have been for a long time well-known in Central Asia.