The old bazaar Eski Juva (‘old tower’), better known as Chorsu (‘four courses’; also spelled Chor-Su), is located in Tashkent Old City at a crossroads of four roads. It features an abundance of colorful and exotic merchandise, and, though thoroughly restored and renovated, the fascinating aura of old-time Asia and folklore all year round. It is one of the oldest Central Asian bazaars; it was known as far back as the Middle Ages as an important Silk Road destination. Just imagine yourself walking about this bazaar a few centuries ago - past merchants, packed camels, artisans, their shops, shoppers... It is almost the same today. 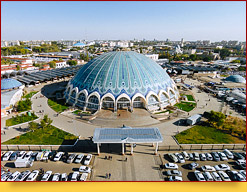 According to the notes of travelers who visited the bazaar in the past, it boasted innumerable rows of stalls with various merchandise, as well as artisan shops, bathhouses, caravanserais, teahouses and other facilities.

The merchandise in today’s Chorsu Bazaar is divided into the following sections: food, handicrafts, and clothing and other things. The first two sections are especially interesting. They are located under large pavilions with blue Central Asian-style domes. The main dome in the center resembles the dome of Tashkent Circus (which is located in the same district of the city).

Food is also offered as to its types in a number of sections. For instance, there is a dairy row where they mostly sell katik (yoghurt-like Uzbek sour milk; also spelled katyk, qatiq, qatyq), local types of farmer cheese, feta-like brined curd cheese and qurut. The latter is a traditional and very common Central Asian product. As a rule, it is dry small white balls of suzma curd, varying from 1.5 to 4 or more centimeters in diameter, with a lot of salt in them. Sometimes qurut (also spelled kurut, kurt, qurt, gurt, qort) is made in the form of little diamonds, cubes and sticks. It also comes in pink, with red pepper added, and in brown if smoked. Qurut is quite filling, and - it is surprising to know - it quenches one’s thirst well in hot summertime. For centuries nomads, caravan merchants and pilgrims took qurut with them to eat on the way, since it very well keeps its taste and does not spoil for a long time. 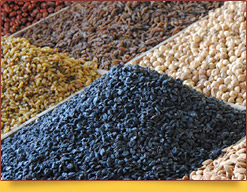 One of the most popular Uzbek sweetmeats is navat (also spelled nabat). It is made from concentrated sugar syrup, which crystallizes while it is being boiled. With its numerous sparkling facets, navat may at first seem to be large crystals of gems. Navat comes in various hues from whitish to light yellow and even dark brown - depending on how long they boil it.

The spice rows no Asian bazaar can dispense with offers barchans of cinnamon, nutmegs, turmeric, cardamom, chili and black pepper, cloves, cumin, coriander and dried ground tomatoes… You can taste all of them, picking up the best common spices and new ones for your kitchen.

If you go on exploring the bazaar, head for the artisan rows. It is where they make and sell various souvenirs, jewelry, suzani tapestries (also spelled suzane, syuzane), traditional tableware - dishes, tea sets, piyala drinking bowls (also spelled piola, piyola, piala), kosa eating bowl (also spelled kasa, kese, qosa, qasa), etc. - and many other handicrafts. Very attractive and interesting are the beautiful intricate patterns of Samarkand, Bukhara and Khiva carpets in the row next to them, and the shops with traditional Uzbek musical instruments: the karnay - a very long brass wind instrument (also spelled karnai, qarnay, kernei), surnay or zurna - a flute-like woodwind instrument (also spelled surnai, sornai, zurna, zurma), doyra - a tambourine-like percussion instrument (also spelled dayereh, dojra, dajre, doira, dajreja), dombra - a two-string pluck instrument with a large pear-shaped body (also spelled dombyra, dambura, dumbyra, tumbyra, danbura, donbira), zang - a bracelet with small bells, and others. Every master craftsman will be pleased to tell you about his work: how long it takes to make a dombra, for instance, what material is used for it, etc.

There are also shops where they make and sell traditional chests and beshik cradles, as well as forges where you can see how Uzbek knives are made, and buy them. If you walk a little further along the artisan aisle, you will see an quaint structure of about two centuries old. It is where the prominent chasing masters work, making fascinating designs on metal jugs and trays. (Note: since they are handmade works of art, taking them out of Uzbekistan may be prohibited, so make sure it is allowed to take the item you want to purchase abroad).

In the clothing section of the bazaar they sell European-style and traditional Uzbek garments, as well as various textiles and kurpacha traditional cotton-wool blankets and mattresses. The national clothes - chapan robes, khan-atlas ‘king of satin’ satin dresses, etc. - as well as tubeteika scull-caps (also spelled tubeteyka, tubatay, duppi, doppi, doppa) and turbans are mostly very colorful; each color and design in their decoration has its own meaning. A tubeteika, for instance, shows where the person wearing it comes from and on what occasion he / she has put it on.

While visiting Chorsu Bazaar, you will see a lot of interesting ethnographic details of the indigenous people: what they wear, eat and shop for; how they behave, bargain…

It is a custom to bargain at any Asian bazaar, as against shopping at stores. They set the prices to be lowered a little if bargained over. The art of bargaining has been formed and perfected in Asia for centuries. However, note that some Tashkent bazaar sellers are sometimes reluctant to or even refuse to bargain nowadays, especially if they are holding the stalls they have to pay for, and unless they are in a hurry to sell their merchandise. (You should always try to start bargaining, though.)

You can easily get to Chorsu by various means of transportation in the city. We recommend that you try to use beautiful Tashkent metro, which is itself a tourist attraction. The both exits of the metro station Chorsu lead right out into the bazaar.

Photos of the bazaar: