Siab Bazaar in Samarkand is still as impressive as it was many years ago. Its abundant produce and handicrafts is evidence of the natural wealth of Uzbekistan and its people’s talents and diligence. 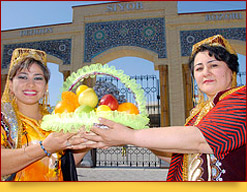 Samarkand Siab Bazaar is like Chorsu Bazaar in Tashkent. Both of them have been for a long time well-known in Central Asia. Samarkand was a capital city a few times in the past. In the 14th - 15th centuries it was the capital of Tamerlane’s empire; in 1924 - 1930 it was the capital of the Uzbek Soviet Socialist Republic of the USSR. Both Samarkand and Tashkent were trade centers, with a lot of merchants and shoppers coming to them from various areas. That was why Tashkent and Samarkand bazaars were always crowded and full of various merchandise.

Siab Bazaar is located not far from The Registan Square, near Bibi-Khanym Mosque and Shakhi-Zinda Necropolis. The entrance to the bazaar is a high arch decorated with blue and dark blue mosaic at the top. Once you are inside, you find yourself among many colors, scents and sounds. The best time to visit an Asian bazaar is summer and early autumn. It is hard to name everything you can see at bazaars in these seasons: colorful fruits, berries, vegetables, gourds, cereals, salad greens… In other seasons the bazaar is not poor either.

The bazaar is roofed, so you can visit it in any weather. The buzz accumulates under the top of the pavilion; it is peculiar to the Siab Bazaar. 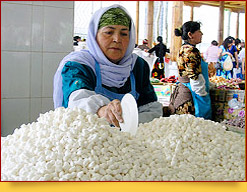 There is, of course, a catering row with dizzying scents of the national dishes; most of them are cooked on the spot - shashlik kebab, pilaf, shurpa soup, lagman noodles in meat and vegetable soup, samsa pasties, khanum steamed dough with vegetables… You can stop there to rest and refill energy, trying them or locally made fast food meals, and having some green tea - the traditional Asian drink. In spring, when the celebrate the holiday Navruz, there are rows of tables with the traditional spring holiday dish sumalak - a sweet brown paste made from germinated wheat; it is sold there in jars or smaller containers. 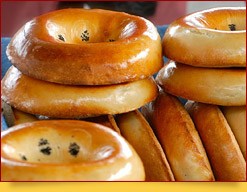 In the handicrafts section the artisans make almost everything on the spot; their skills and diligence are very impressive. You can watch them engraving, carving, forging, painting - and, of course, purchase anything from a wide variety of souvenirs and household items made there.

Uzbek flat round bread differ in size, shape and taste as to provinces, and Samarkand has long been famous for its bread. Although there are about 17 recipes of it, it is known in Uzbekistan and outside it as Samarkand bread. These recipes have been developing and perfected for many centuries - since the times of nomads and long trade caravan journeys when it was necessary for bread to remain edible for a long time. Samarkand flat round loaves do not spoil and keep their unique taste for months. Some Samarkand loaves today are made especially for tourists; they have various symbolic designs, relief pictures and inscriptions.

While visiting Samarkand, it is absolutely necessary to see Siab Bazaar. Otherwise the picture of the city will be incomplete.

Photos of the bazaar:

view all the photos »»