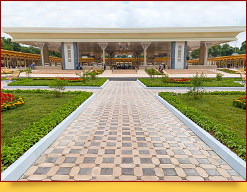 Tashkent is rich in bazaars; Chorsu Bazaar, Oloy Bazaar, Farkhod Bazaar and many smaller ones are an indispensable feature of the city. Thanks to its impressive main entrance and overall appearance, Oloy Bazaar is often showed in Tashkent sights photos.

Almost any large bazaar has a history of a few centuries long. Oloy Bazaar was opened in the 1870s. It was the time the Russian Empire was annexing Central Asian kingdoms; Tashkent became the main city Syrdarya Province then, and soon a lot of Russians moved to it. At first they were military men, explorers, doctors and their families. They settled around old Tashkent; its territory was expanding and formed the beginning of The New city.

The layout of the major roads in it is still the same, so it is easy to tell the locations of that time, including Oloy Bazaar, in old maps. The bazaar had no name in the 19th century maps but it is a known fact that it was named Oloy then after the Turkic word oloy meaning ‘a soldier’. So it was ‘a soldier bazaar’ where clothes and other man-made things were sold. 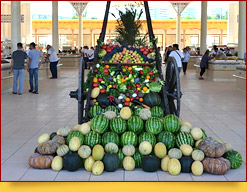 Not all the maps of Tashkent of the late 19th - early 20th centuries show the bazaar, which seems strange today. The case was that it was temporarily closed or considered insignificant when such maps were being prepared. The central bazaar of The New city then was Voskresensky Bazaar located where The Navoi Opera and Ballet Theatre stands today; the main bazaar of The Old Town was the bazaar Chorsu.

There is a controversial statement that Oloy Bazaar was founded much earlier - in the 12th century - and was named after Oloy Mountain. This speculation has not been supported by historical evidence and documents but is somehow widely spread on the Internet.

After Uzbekistan became independent Oloy Bazaar was thoroughly reconstructed. The main entrance to it looks grand and has beautiful designs. The first part of the bazaar is a two-storey pavilion with boutiques, souvenir and jewelry stores selling local and imported merchandise. It is somewhat dark inside because of the dark-green roof and dimmed light in the stores and passages. 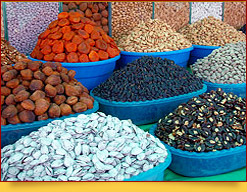 After you have gone out of the pavilion, you find yourself in a square with a small fountain. Beyond it there are farmers’ rows. The aisles there are quite wide, which makes it perfect to see, approach and examine everything being offered. You can choose from a wide variety of fruit and vegetables grown in Uzbekistan and outside it. Among the imported produce are bananas, pineapples, oranges, mangos, kiwi fruit and dates. Under the same roof they sell various Asian sweetmeats - navat (grape sugar crystals), kazinaki (pressed nuts or seeds with sugar or honey), parvarda (white hard candies), pashmak (mass of thin sugar threads) and many others - and dried fruits and nuts and stones - raisins, currants, sultanas, dried apricots, nuts in dried apricots, salted cracked apricot stones, almonds, hazelnuts, pistachios… Nearby they sell various wicker baskets for fruits, flowers, etc.

Earlier there was a clothing section but it was removed in 2011. The bazaar has a large and conveniently built car park. Few people and little bustle in the bazaar is its distinguishing feature.

Since the location is in the center, it is quite easy to get there from anywhere in the city. There is a bus stop with a lot of shuttle buses and taxi shuttle minibuses right before the main entrance. You can also get to the bazaar by metro, traveling to the Yunus-Abad line station Abdulla Kadiri; its exit is before the main entrance, too.