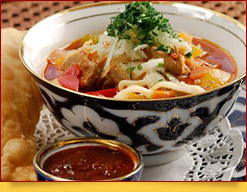 Lagman is one of the most delicious dishes of national Uzbek cuisine. This dish is made with simple products, but chef’s hands turn them into a real masterpiece of culinary art. Where has lagman originated and what country owns a right to call the dish its national is a controversial question. The roots of its originations go back to the ancient China, but the recipe had been changing and supplementing under the influence of the culture of Uighurs, Dungans and other nationalities.

One legend is usually associated with the “creation” of lagman. Once, three hungry travelers met. One had only a kazan, the other had some flour and dried meat, third - radish and fragrant spices. One traveler was a pupil of the master of culinary arts, so he decided to cook a dish with “whatever they had”. The smell of the dish that was being cooked attracted the attention of the passing by Chinese magnate. He was the first who tasted this new dish and, speaking in modern language, patented it by decree – to cook the dish always!

As the matter of fact, the lagman is Central Asian spaghetti with the addition of meat, greens, spices, and broth. Noodles shall be cooked by hand at home.

In Uzbekistan, two main types of lagman are widespread; these are Uigur chuzma-lagman (stretching lagman) and Uzbek kesma-lagman (cut lagman).Uzbek lagman is cooked differently in each region of the country. 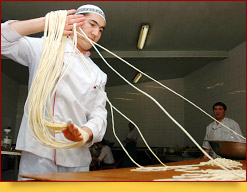 It is very exciting to observe the process of lagman cooking. As a rule, men roll the noodles (for Uiguк Lagman), first the long rolls of dough are to be made and then these rolls are to be rolled out. Skillful cooks are doing it clean and skillful – long rolls of dough are to be wrapped around the spread hands (as yarn, which shall be tangled into the ball), then master begin tossing it up, spreading the hands wider, stretching the dough rolls up to the thin noodles.

There is another method of noodles cooking, when thin rolled out dough is to be cut into the long strips as any other home-made noodles. This is Uzbek Lagman.

In the most recipes of lagman the ordinary dough, made of flour, water, salt, eggs, although not all cooks use the egg (the dough without it is softer), some also add vinegar, is used.

It’s hard to call lagman the first dish, but it is also too liquid to be served as the second. It is very nutritious - one portion of the lagman can kill hunger for a long time.

The main feature of this dish is a step-by-step and separate cooking. Finely chopped vegetables (onions, bell peppers, tomatoes, carrots, green radish, eggplants, cabbage, and potatoes) are separately fried with meat and spices. In Uzbekistan, mutton is used for this dish, but you can use beef or chicken. Separately boil the cooked noodles. 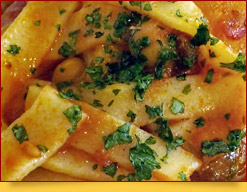 When serving, a portion of noodles is separately poured with cooked broth and vegetables with meat, the dish is then decorated with finely chopped greens. The smell of lagman is incomparable! In addition to greenery, the ready lagman can be dressed with vinegar, soy sauce or spicy dressing. You can also put these additional spices on the table, so that everyone can choose what they want according to their taste.

Lagman is one of the most popular dishes in the menu of any cafe, restaurant or canteen in Uzbekistan. It is definitely worth a try! However, we shall worn you, if you were served with long noodles (Uigur lagman), then you will have to be patient. The dish is very tasty, but to get used to it, you will need some time and a little practice. The Uigur lagman is cooked in most restaurants in Tashkent, while the Uzbek one is more common in Bukhara and Samarkand regions and Fergana valley.

Ready noodles for lagman is often sold in the markets of Uzbekistan, you should only fill it with broth, fried meat and generously decorated with greens (onion, cilantro, dill, celery, parsley).

One of the recipes of Uzbek lagman is the following:

Mix the dough using milk, yolks and flour and leave it for 2 hours. Roll out the dough thin and cut it into the long narrow strips, which you can then additionally pull out. Boil the noodles in salted water for 10 minutes, then put in into the colander and let the water drain off. The cooked noodles should be dressed with vegetable oil.

Meat should be cut in small pieces and onions in rings. Fry the meat with onions in oil and then add tomato paste, pre-soaked peas and stew the mix for 10 minutes. Then add potatoes, cut into strips, cumin, salt, pepper and half a glass of meat broth. Cook until the dish is ready.

To warm the lagman before serving, the ready noodles are poured with the remaining meat broth and brought to a boil. The bottom of the bowl should be laid with noodles (lagman); meat with vegetables should be put above dressed with sauce left in kazan.