Pictures and Map of the First Underground in Central Asia 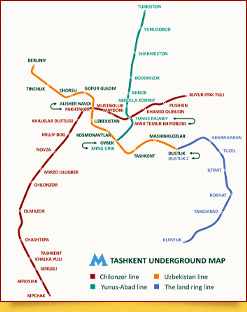 Tashkent Metro is one of the most beautiful in the world, but it’s not its only uniqueness. Building of the underground system in seismically active regions with a hot climate was a daring idea, which eventually resulted in the artfully construction.

Construction of the underground in Tashkent began soon after the destructive earthquake in 1966, and actually was in the years of 1968 -1970. The population of the city increased rapidly, and people needed comfortable public transport system. The work on the laying of underground tunnels was hard and had to overcome a lot of obstacles, one of which - ground water and underground rivers. When designing and building the underground specialists took into account the peculiarities of climate and seismicity of the region and the result of their work was the underground system, which is able to withstand an earthquake up to 9 on the Richter scale.

The first was Chilanzar line, which includes 12 stations. Then the construction of the Uzbekistan line began; now there is "Tashkent" station (railway station in Tashkent) and "Chorsu" (the oldest market in Tashkent). Today, Uzbekistan line consists of 11 stations and its length is 14.3 km.

During the days of independence there was started the construction of the third line of Tashkent underground - Yunusobod, which connected the center of the city with the district of Tashkent TV tower. It is planned to build the fourth line - Sergeli line. Today, the total length of the three existing lines of Tashkent Subway with 29 stations is 36.5 km. 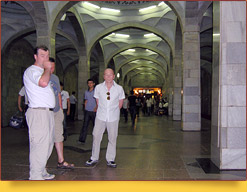 In June 2012, Tashkent Metro celebrated its 35th anniversary, and nowadays it is a source of pride and an artistic sight of the capital. It is worth noting the elegance and uniqueness of each station for the design of which the best artists and decorators from all over the Republic were invited. The main finishing material of the stations is marble and granite, art glass, glazed ceramics, ganch were used for decoration. Solemn columns, great bas-relieves, colorful murals, magnificent chandeliers - this all can be seen when entering Tashkent Metro.