Kukeldash Madrasah is the largest madrasah and one of the most famous historical monuments of Tashkent. It is situated in the historical heart of the city, in the area of the Chorsu square and Registan of Tashkent. In the IX and X centuries there were Kesh gates here, one of the three city gates. 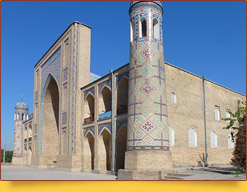 The central architectural ensemble - Registan was in every big city. The buildings included in this ensemble are of refined architecture, monumentality, original idea and an unusual finish. Registan of Tashkent is not an exception; it is enough to look closely at Kukeldash Madrasah.

Kukeldash Madrasah was built in the XVI century (1570) during the reign of the Shaybanid dynasty by the vizier close to Tashkent sultans Barak-Khan and Darwish Khan. The Vizier was nicknamed "kukeltash" (‘Kukeldash’), which means "foster-brother of Khan”.

Kukeldash Madrasah is one of the largest madrasah of the XVI century, preserved in Central Asia. It was built of baked bricks in a traditional style of madrasah: a large courtyard surrounded by monastic cells-khujdras, a darshana (class room) and a mosque. Facade opens an elegant entrance portal with the height of almost 20 meters (peshtak), two-floor balconies with corner towers - guldasta. The portal has residual decor - majolica and glazed bricks. On the windows of the madrasah there are special sun-protective gratings - pandjara, in its patterns an attentive visitor can see woven into the pattern names, holy to any Muslim, Allah and the Prophet Muhammad..

Kukeldash Madrasah was repeatedly repaired and restored, so the current appearance of the building is very different from the original, although by size and architectural design this monument of ancient architecture is not inferior to the famous medieval madrasahs of Bukhara and Samarkand. 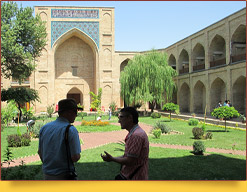 A lot of legends are associated with Kukeldash Madrasah. For example, it is believed that for a long time, it was a place of execution - from the highest parapet of the central portal unfaithful wives and criminals were thrown in bags onto Sheyhantaur street next to Kukeldash Madrasah. Another legend tells the story of an unusual sprawling pistachio tree, which for hundreds of years was growing right on one of the domes of madrasah and was considered holy.

In the XIX century Kukeldash Madrasah survived two earthquakes, in 1868 and 1886; the arch of entrance portal was destroyed and partially restored only in the 60s of the XX century.

In the years of Independence Kukeldash Madrasah building was completely renovated in accordance with pictures of 80s of the XIX century. Today, it is a magnificent two-storey building - the centerpiece of architectural ensemble of Tashkent Registan. After the restoration, it was decided to return the role of spiritual institution to Kukeldash Madrasah.

From the corner towers of madrasah muezzins call believers to namaz, in the left part of the building there are classes for students living in khujdras, in the right part religious services are held.