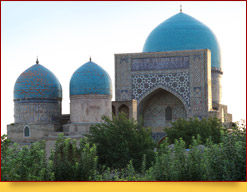 The memorial complex Dorut-Tillavat (‘contemplation place’) dates back to the late 14th – early 15th centuries. It is located in an old cemetery in the south-east of Shakhrisabz. It is where Emir Taragay, Tamerlan’s father, died in 1360 or 1361, is buried. The formation of the complex began after the death of the famous and revered Sufi religious figure Shamseddin Kulyal who was the spiritual father of Taragay and Tamerlane himself. Shamseddin Kulyal was one of the founders of Sufism and the sheikh Bahauddin Nakshbandi’s mentor. He grew up in a potter’s family, hence was his nickname Kulyal (‘pot maker’). He was very much respected as early as during his life; people used to go to him for advice concerning both religious and secular matters. According to historical sources, he was also called Amiri-Kalyan, which means ‘great emir’. Tamerlane once said that what he had achieved was thanks to Shamseddin’s prayers and wise instructions. As a token of his gratitude Tamerlane ordered to put a gorgeous marble sagana tomb over his grave. The mausoleum of the Sufi became a place of worship of his numerous adherents, and towday pilgrims from many Asian countries still come to the mausoleum to pay their tribute and pray.

A part of Dorut-Tillavat Complex was set aside for a madrasah. It was the building where Tamerlane moved the remains of his father Taragay, so the madrasah became a mausoleum as well. The construction of the complex was completed during the rule of Tamerlane’s grandson Mirzo Ulugbek, the world-famous astronomer. In 1435 he ordered that the mosque Kok-Gumbaz (‘blue dome’) be built on the foundations of an earlier structure in the cemetery. The mosque was constructed to be perfectly symmetrical with the mausoleum; they even had to turn it away from the direction of Mecca a little for the purpose. The portal of the mosque has an inscription saying that Ulugbek built it on behalf of his father Shakhrukh. 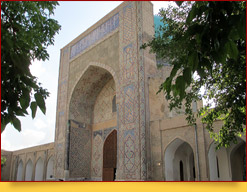 A little later the great astronomer began the construction of a makbarat sepulcher by the southern wall of Shamseddin Kulyal Mausoleum. The sepulcher was intended for Ulugbek’s descendants and relatives of the Tamerlane’s dynasty. The building has the decoration characteristic of the 15th century. The façade bears blue decorative patterns. The delicate mosaic on the walls contains ethnic Central Asian themes.

The marble tombstones in the complex appear to have belonged to Termez sayyids (sayyid is an honorific title denoting males accepted as descendants of the prophet Muhammad through his grandsons, sons of the prophet's daughter and his son-in-law). That is why the complex was also called Gumbezi-Sayyidan (‘dome of sayyids’) later. Historically, they do not have anything to do with Ulugbek. How did they find the way the complex? After long research historians and archeologists found out that they were accidentally moved to the grounds of the complex from the neighboring cemetery, since the wall surrounding Kulyal Mausoleum, Ulugbek Sepulcher, Kok-Gumbaz Mosque and the grave of Emir Taragay did not survive.

Most of the complex survive. Thoroughly restored and reconstructed, it is of great interest as a historical and architectural monument of the 14th – 15th centuries, mthe times of the Tamerlane’s dynasty. The 600-year-old Ulugbek Sepulcher entrance door is still in good condition, showing the original splendor of its delicate carvings.

One of the grand Shakhrisabz buildings bears an inscription citing Tamerlane: ‘If you doubt our grandeur, look at out buildings’.