Monument of the Timurid Dynasty in Shakhrisabz (Uzbekistan) 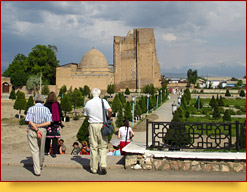 When the eldest son of Amir Timur, Jakhongir, suddenly passed away in Samarkand at the age of 20, the king grieved greatly. He loved his son a lot, and got him to be the heir to the throne. In a burst of emotion king wished to build a mausoleum for the late boy, luxury and magnificence of which would reflect all father’s love. He called the best architects from different cities, including those from Khorezm. His wish was to build up a magnificent building in the homeland of his forefathers, in the city of Shakhrisabz. The complex is called Dorus-Saodat (‘Dorussaodat’), in Russian means “Repository of power” (‘Seat of Power and Might’).This memorial was designed not only for Prince Jakhongir, later it became the family tomb of the Timurid dynasty.

After some time, the second son, 29-year-old Umarshaykh (Omar Sheikh), who was killed in a battle (1393-1394) at the siege of the fortress in Iran, was buried here.

The construction lasted from the end of the XIV to the beginning of the XV centuries. At that time, Timur wanted Mawarannahr to be the status of the largest empire in the East not only because of vast lands, but also of rich cultural heritage. Shahrisabz was becoming a spiritual center of the cultural center of this part of the East. There were a large number of bright persons, including well-known scholars and poets: Alisher Navoiy, Jami, Mirzo Ulugbek. 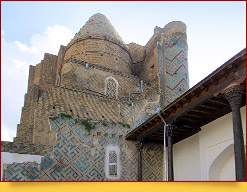 According to the chronicles of the ancient authors, the height of Dorus-Saodat at the highest point, the outer dome, reached 27 m. The front arch had a powerful portal, on its niches you could see colorful patterns, epigraphic runes, stretching like a long ribbon around the body of the front part of the building. Facade of the building was lined with majolica of different colors but the dominant ones were blue color and its tints. The rest colors stood out against its background, creating a beautiful artistic image. Massive front door was covered with tiles harmoniously neighboring with ornaments of gold and azure.

One part of the complex was marked off for a madrasah. Dorus-Saodat Madrasah was originally had a mosque, where cult actions, religious rites were committed and ceremonies of remembrance were done. Here under the decree of Timur now and then sacrifice was offered in the name of peace of the souls of Jakhongir and Umarshaykh. Inside the courtyard, on the perimeter there were rooms, where lived servants of madrasah as well as some members of the clergy in the estates built here. In the center was a flowering garden with fountains and iwans. 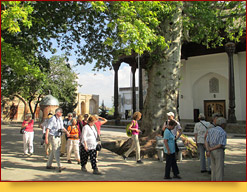 Behind Dorus Saodat complex there is one more part of it - the tomb of Amir Timur. By one version, in 1943, a local boy was playing the ball and fell into the ground. Thus the crypt of Tamerlane was discovered.

Timur ordered to build the crypt shortly after the completion of the construction of the complex. The crypt was in the ground, and entrance was through a magnificent ground construction, made of the same style as the tombs of his sons. Abrupt stairs led to a cross-shaped room, the center of which was a rectangular room. Everything was made quite modest, and that did not correspond to the character of the king. Apparently, the building was not completed due to an unknown cause. Walls, floors and arched ceiling forming a small dome, were made of slabs of white marble. On the walls, in carved arches you can see medallions of ellipse form inside which displayed calligraphic inscriptions. These are mainly extracts from the Koran, texts of prayers, different sayings. In the middle there is a marble sarcophagus covered with a monolithic slab with thickness more than 10 cm. On the slab there were inscriptions consisting of letters to Timur and relating to his life. On this basis, we can state that the place was for the burial of the lord. But fate willed this tomb to remain empty; Tamerlane was buried in Samarkand, in Gur-Emir complex.