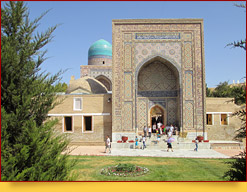 The complex, a UNESCO World Heritage Site, is a major Samarkand tourist attraction and an important Islamic holy site. They say going on a pilgrimage to it equals a hajj to Mecca.

The name Shah-i-Zinda, ‘the living king’, refers to Kusam ibn Abbas (also spelled Qutham ibn Abbas, Qusam ibn Abbas), the Prophet Muhammad’s cousin, who came to Samarkand from Mecca to propagate Islam in the 7th century. According to local legends, he was attacked by pagans while praying with his followers and escaped death through an Islamic saint’s help - either disappearing in a crevice in front of them, miraculously opened at the time of the attack, or, beheaded, hiding in a well alive, with his head in the hands, where he still lives in underground paradise. Hence they named the site Shah-i-Zinda. 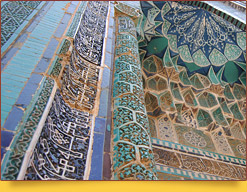 The inscription on the tombstone of Kusam ibn Abbas says, ‘Those who are slain while following Allah’s way are never counted dead. No, they are alive.’

The earliest mausoleums were built around the shrine of Kusam ibn Abbas at the top of the hill. The later ones were erected down the slope in a string. Running along them is a 200-meter-long alley with stairs.

The shrine of Kusam ibn Abbas is actually a small architectural complex of a few buildings dating back to the 14th - 15th centuries. Opening into the shrine is an old wooden door dated 1404 - 1405. It features elaborate carvings and was initially decorated with ivory inlays. The interiors feature tile decorations in the mihrab (a niche indicating the direction of Mecca) and on the ceiling of the antechamber where pilgrims prayed. There are also very impressive muqarnas right below the dome (also mocárabe, honeycomb work, or stalactite work; a corbel or vault decorative device in traditional Islamic and Persian architecture, reminiscent of stalactites, taking the form of small pointed niches, stacked in stairs-like tiers). The cenotaph - decorated with blue, yellow, white and green tiles, as well as with gilt and Koranic inscriptions - is surrounded with a finely made old wooden screen.

The closest to the shrine are the mausoleum of Amir Burunduq, Tamerlane’s general, and the three mausoleums forming the upper courtyard-like end of the alley: Tamerlane’s wife Tuman-Aqa’s (early 15th c; with a mosque included), religious enlightener Hajji Ahmad’s (mid-14th c; built before Tamerlane) and the anonymous one of ‘a girl who died chaste’ (1361). 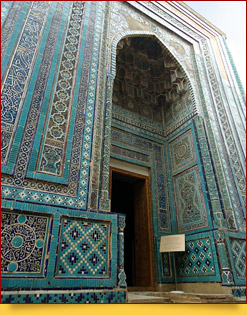 The highest of them is Tuman-Aqa’s, with its bright blue dome dominating this part of the necropolis.

The middle cluster is comprised of the mausoleums of Tamerlane’s relatives and noblemen, dating back to the late 14th century - early 15th century. They are Tamerlane’s niece Shad-i Mulk Aga’s and Amir Zadeh’s to the west, and Octagonal Mausoleum, Tamerlane’s sister Shirin Beg Aga’s and Tughluk Tekin’s to the east. The bulbous dome of Shirin Beg Aga Mausoleum still has its tile decoration surviving. There also two anonymous mausoleums preceding them as the alley runs down.

Lower, next to the alley stairs located at a distance of about 20 meters from the gateway, stands Anonymous Mausoleum 3 (1425), which was earlier associated with Qadi Zada al-Rumi, a prominent medieval astronomer, Ulugbek’s colleague and friend (also spelled Qazizadeh Rumi, Qazi-Zadeh Rumi, Kazizade Rumi, Kazi-Zade Rumi). Featuring two turquoise domes on high drums with inscriptions, it is the highest building of the necropolis. They believed Ulugbek had ordered that it had been built this high to show his great respect for Qadi Zada al-Rumi and his significance for science. However, the results of an archeological study of the crypt in 1977 indicated that the mausoleum was not Qadi Zada al-Rumi’s.

A typical mausoleum of the necropolis features a pishtaq portal (a projected rectangular portal) with an iwan entrance (a vaulted space in it), a double-shell dome - ribbed or smooth - and a square chamber with a crypt under it. The portals facing the alley, the domes, their drums, and the interiors of the mausoleums are ornate, while their other sides are plain or have little decoration.

The decoration of the portals, their iwan entrances and dome drums includes exquisite tile mosaics (geometric and floral designs), glazed brick claddings, various bands of Kufic and Thuluth inscriptions from the Koran and Persian poetry and wisdom heritage (as well as names of master craftsmen and patrons), muqarnas and others - most of them similar to the ornaments of other famous Timurid era edifices. The interiors also feature carved plaster designs and murals, gilt on the glaze and even landscapes and dragons (evidence of Chinese influence). 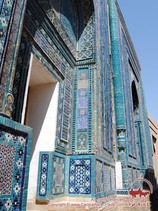 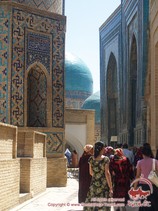 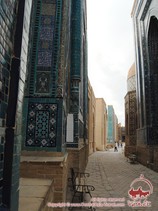 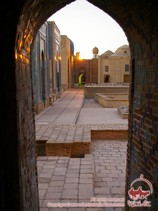 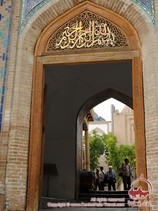 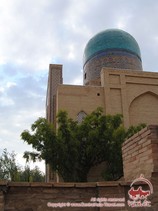 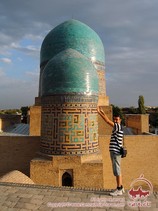 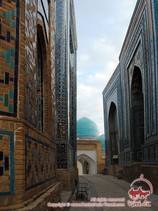 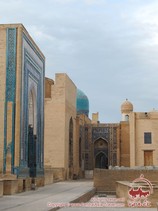 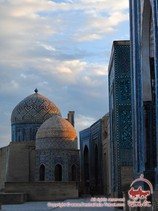 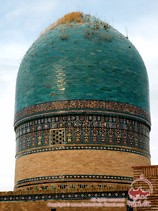 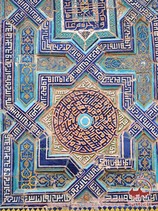 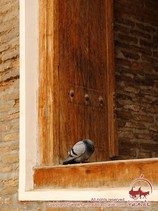 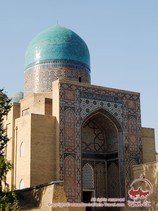 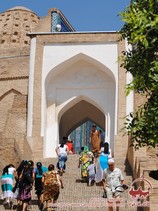 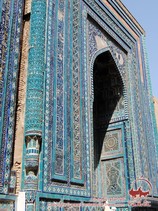 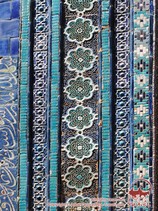 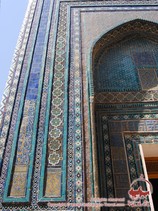 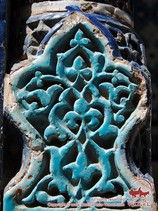 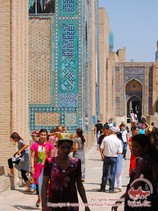 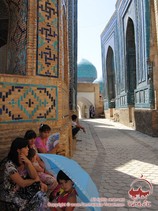 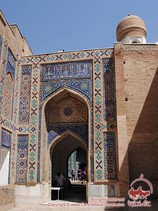