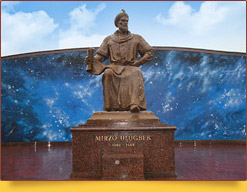 Mukhammad Taragay, who is better known as Ulugbek (Ulug means great, while bek means ruler), is the creator of one of the most interesting historical monuments of Samarkand the unique erection - medieval observatory.

He was born in March 22 in 1394. Ulugbek was the grandson of the famous Amir Temur. He aspired for knowledge since the childhood and laid his interests especially on exact sciences. He was educated by the prominent persons of that period such as philosopher and writer Arif Azari, outstanding mathematician and astronomer Kazi-Zade Rumi and others. At an early age, in one of Temur’s campaigns to the Sultanate he was with his grandfather and there he saw an extraordinary erection, which was an observatory built by Azerbaijan scientist Nasar Ad-Din Tuya. It was presumably the time when the future astronomer conceived the idea of creating his own observatory. 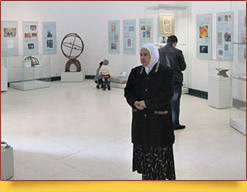 It is important to note that astronomers made a considerable contribution to the observatory, which is historical monument, rather than architects. The erection itself is a well adjusted and original device for observing cosmic bodies.

Ulugbek tried spending most of his free time in the observatory. He inspired scientists, working under his rule, tried to be the research advisor, as possible, of all studies and researches conducted.

Despite the fact that Ulugbek was a humane ruler and an outstanding scientist, there were people who, unfortunately, disliked a political way ruled by Ulugbek. Some people believed that Ulugbek focused extensively on a science and in 1449 he was beheaded as a consequence of a conspiracy. The observatory continued working for the next 20 years, despite the tragic event. Then the persecution against the scientists was launched and it made the members of the observatory leave Samarkand. Finally, they found a shelter in Herat, where Alisher Navoiy, a famous writer and a poet of the Orient, was the senior minister. 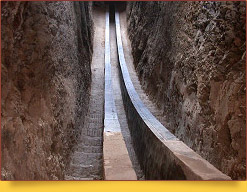 It should be noted that ‘Zizhdi Djadidi Guragani’ or ‘New Guragani ephemerides’, the main treatise made by Ulugbek, left for a long time the unique paper. European scientists managed to make such calculation by the 17th century only.

As for the observatory, it was left deserted, but by the 16th century it was partially taken to pieces. In early 20th century Vyatkin L.V. went to great lengths to find the remains of the observatory. Only a sextant, a part of a great device of the observatory of 40.2 m radius that orients itself from the north to the south, still existed. Altimetric measurements of heavenly bodies over the horizon were made by that graphometer.

In 1964 near the place of stay of the majestic observatory a Museum named after Ulugbek was built. Photographs from the excavations, frescoes that depict that period collected in it, and also some instruments of the observatory and passages from the famous ephemerides presented here.

A Monument of Ulugbek was unveiled in 2010 near the Museum. 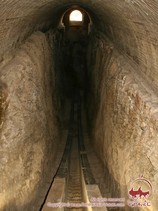