The Friday communal prayer mosque Bibi-Khanym (‘senior princess’ or ‘senior wife’; also spelled Bibi-Khanom, Bibi-Khanum; Uzbek: Bibi-Xonim masjidi) in Samarkand, Uzbekistan, is one of the largest and most impressive historic mosques in Central Asia and the Islamic world in general. 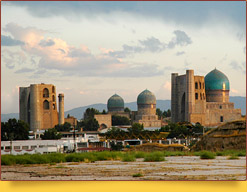 Bibi-Khanym was the nickname of Saray Mulk Khanym (interchanging with variant spellings Serai, Mulq, Khanum), Tamerlane’s senior wife. Ruy Gonzalez de Clavijo, the ambassador of Henry III of Castile to the court of Tamerlane (Timur) in 1403 - 1405, wrote she was also nicknamed Cano (‘the great khanym’). According to legend, it was Saray who ordered that the mosque be built to please her husband when he came home from his victorious campaign in India. (Hence the mosque was named after her.) However, historians believe Bibi-Khanym Mosque was built by order of Tamerlane himself.

According to Clavijo (see the quotation below), Tamerlane wanted to erect the mosque in honor of his wife’s mother. Besides, the word bibi also translated as ‘mother’. This fact, however, has not been authenticated.

They launched the construction of the mosque on May 4, 1399, on the site Tamerlane had chosen for it by himself. The best master craftsmen of the day were involved in the building works, including 200 hundred stonemasons brought from the conquered countries; 500 more workers were busy preparing the stone for the mosque in the mountains and delivered it to Samarkand. Around 100 elephants had been brought to the site from India to speed up the progress of the construction.

The major part of the mosque complex was completed in 5 years, a record at the time. Its yard could accommodate 10,000 of the faithful as early as September 1404. However, Tamerlane did not like the structure when he returned to Samarkand after another campaign. He found that the portal was not large enough in comparison with the madrasah standing across from it. (Named Khanym Madrasah, it had been earlier built by order of Saray Mulk). He wanted the mosque to be the grandest, impressing on people the power of God and the imperial might of himself. Enraged, he ordered that the two aristocrats who had supervised the construction be hung and the portal be replaced with a larger one (finished in November 1404).

In his embassy diary Clavijo writes:

The mosque which Timur had caused to be built to the memory of the mother of his wife... seemed to us to be the noblest of all we visited in the city of Samarkand, but no sooner had it been completed than he began to find fault with its entrance gateway, which he now said was much too low and must be pulled down. 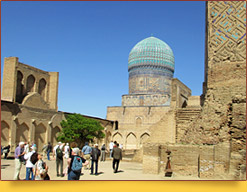 All the structures the mosque consisted of initially formed a coherent whole as they were connected with an arcade with 480 marble pillars. The huge portal featured carved marble ornaments and an alloy gate made of seven metals, including gold and silver. When opened, the gate vibrated and dinged to the muezzin calls issued from the tops of the four 80-meter-tall minarets.

However, the technologies and materials the builders of the mosque used were not adequate to make such a huge structure durable enough, and they had not provided for seismic risks. The mosque began crumbling away as early as Tamerlane’s lifetime; the dome cracked and sometimes its bricks fell on the heads of the worshippers praying inside.

Only five of the original mosque structures have survived from those times: the portal, the large domed hall, two small domed halls and one of the minarets. There is also an enormous stone reading stand for the Koran, set up during Ulugbek’s reign, in the centre of the courtyard. 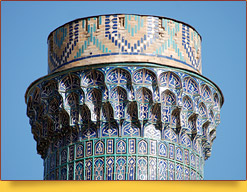 The mosque exterior decoration features rich geometric, floral and inscriptional designs made of glazed, majolica and terracotta tesserae - standard and specially shaped - in combinations. The interior is decorated with patterned murals; the inside of the dome is adorned with gilt papier-mâché ornaments.

The restoration of Bibi-Khanym Mosque, started in 1974, was completed only in the 21st century. All the remaining structures of it have been reinforced and restored to their original beauty by now.

Khanym Madrasah, which stood across from the mosque, has not survived into the present except for the mausoleum in its courtyard - an octagonal pillar-like structure with a crypt in it. When archeologists opened its marble sarcophagi in 1941, there were remains of two middle-aged women in rich clothes in them. One of these women was probably Saray Mulk Khanym.

There is a 600-year-old bazaar near Bibi-Khanym Mosque. It still retains its medieval features and aura and so is quite worth visiting as well. 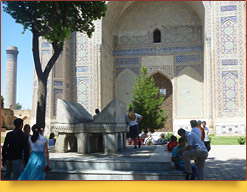 Legend has it that Bibi-Khanym ordered that the mosque be built because she wanted to please her husband with it after he returned from war. She invited the best craftsmen from all over the world, and soon the construction began. When Tamerlane was on the way back to Samarkand, the mosque had been completed except for the arch of its main portal. The young architect delayed finishing it, for he would otherwise have to part from beautiful Bibi-Khanym whom he was very much in love with. Bibi-Khanym was enraged, but the young man was indispensable for the construction. She begged him to hurry up and he finally agreed to - but only on condition that she let him kiss her cheek. The empress had to give in, but when he was about to kiss her, she covered her cheek with her hand. However, his kiss was so hot that it left a small spot on her cheek even through this cover.

When Tamerlane and his troops marched into the city, they were amazed by the splendor of the domes and minarets of the mosque. However, his mood changed when he saw the spot on his wife’s cheek. He demanded an explanation and Bibi-Khanym had to tell him about the architect. Enraged, Tamerlane ordered that the young man be captured, but he made wings and flew to Mashhad.

There is a popular belief that if a woman who has not be able to get pregnant for a long time comes to Bibi-Khanym Mosque, touches the Koran reading stand in its courtyard and prays, she will certainly have a baby.