There is a place in Samarkand, visiting which can lift the veil and solve fascinating mystery of the city. This is “Afrasiab” Museum. It is located in the north of Samarkand, near the ancient settlement of Afrasiab (Afrosiab). Today, the ancient settlement of Afrasiab (was founded in VII-VI centuries BC and existed until the XIII century) represents only a cluster of hills. Afrasiab is believed to have been Marakanda - the legendary capital of Sogdiana (Sogdia). Sogdiana included territories around Samarkand, Bukhara, Khujand and Panjikent in modern Uzbekistan and Tajikistan. 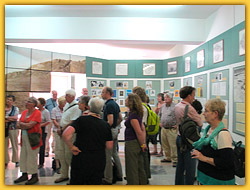 “Afrasiab” Museum tells the story of life, culture and traditions of the people who inhabited this area in very different eras and left their mark in the form of works of art, household items, and tools. Thanks to archaeological findings, scientists were able, as a mosaic, to restore the full picture of the appearance of the city, people's daily lives, and the significant events that took place in this territory. They also managed to find out how looked, and was arranged Samarkand in ancient times. Scientists claim that the city had a lot of intersecting roads; it was divided into districts called guzars. Great attention was paid to defense; outside the city was guarded by a strong wall, built around its perimeter, and inside there was a citadel - Shahristan, houses of residents, temples and workshops of ancient artisans.

The visitors of the museum could enjoy seeing unique exhibits - ossuaries, fragments of ancient swords, elements of knives and arrows, coins, pottery, terracotta figurines, jewellery. The finding, representing the great historical value, became preserved fragments of frescoes of Samarkand palace belonging to the Ikhshidid dynasty, ruling in this territory in the VII-VIII centuries. 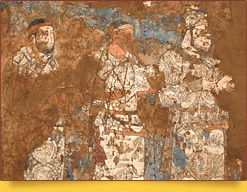 In particular, you can see almost completely preserved walls with pictures of scenes of the life of ruling monarchs. The wall located on the south side of the palace, with the help of masterfully performed paintings tells about wedding embassy which came to ikhshid Varhuma. The bride, assumed the lead in a solemn procession on a white elephant, was the daughter of the ruler of Chaganian. She seemed to be slowly floating surrounded by a number of girls and dignitaries riding horses and camels. The north wall shows the battle scenes of horse men with predatory animals, and boats with people sitting in them, and the east - shows the sea and boys swimming in it, animals and birds. And finally, the wall, located behind the king's throne, shows receiving foreign ambassadors from China, Chach and East Turkestan.

Also in the museum “Afrasiab” you will see sewerage system functioned in ancient times, the remains of ancient people and a lot more. Today, the museum exposition consists of than 22 000 unique exhibits, and their number continues to increase.

In modern look the museum appeared before visitors in 1970. It was built by Armenian architect Baghdasar Arzumanyan and immediately became one of the most famous sights of Samarkand. The opening of the museum was dedicated to the remarkable date - celebrating the 2500-th anniversary of the founding of the city.