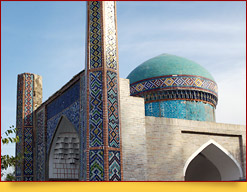 The Madarikhan Mausoleum (‘madarikhan’ - ‘a khan’s mother’ from Tajik ‘madari’ - ‘mother’) is the grave of the mother of Umarkhan, the ruler of Kokand. There is a cemetery behind the mausoleum.

After the death of Umarkhan’s mother, famous Uzbek poetess Nadira, the wife of the late ruler of Kokand, ordered that a beautiful mausoleum be built over the grave of her mother-in-law as a sign of respect and good memory.

Initially, the memorial complex (19th century) consisted of a domed structure with a portal, funeral mosque and inner court. Now, after almost two centuries, the entrance pavilion is the only extant element.

The wonderful portal with a small dome, two faceted minarets and main façade with an intricate décor emanate an atmosphere of perfection and oriental beauty. The builder made the main entrance in the form of a lancet arch decorated inside with a cascade of white ganch muqarnas. When looked at from below, they seem honeycombs turned upside down.

The bright portal décor is composed of many-coloured tiles of various forms, which make up intertwining ornaments and rich artistic images.

Among the specialists that built and decorated the Madarikhan mausoleum were legendary ceramists from Rishtan. One of the decorators even inscribed the date of 1825, when the construction work was finished.

Nadira initiated the construction of a number of beautiful edifices across Kokand. She patronised poetry and other arts, while her poems became the cornerstone of the Uzbek classical literature.

However, the poetess’s fate was tragic: when Bukharan Emir Nasrullo captured Kokand lands after a long internecine war, he ordered that Nadira be killed. Her remains found peace in the Madarikhan mausoleum. Afterwards, all women from the royal family were buried in the mausoleum.