The Monuments of Ancient Khorezm

The archaeological site of Toprak-kala (1st-4th centuries AD) is one of the most remarkable architectural monuments of Khorezm (also spelled Khwarezmia, Khwarizm, Khwarazm, Khwarezm, Khoresm, Khorasam, Harezm, Horezm, and Chorezm). The monument was discovered by archaeologist S. P. Tolstoy in Elikkala District of Karakalpakstan in 1938. Toprak-kala with a population of about 3,000 persons was the principal city of one of the local dynasties. 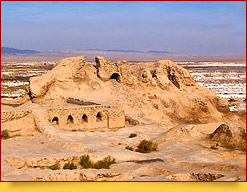 The Toprak-kala site (translates as ‘the earthen fortress’ or ‘the dusty fortress’) has the form of a regular rectangle, 500 m by 350 m, and is surrounded by strong walls 20 m high and 12 m thick with numerous square towers. All the buildings in Toprak-kala were made of large mud bricks. Probably, the Khorezmians possessed special knowledge in architecture allowing them to construct from ordinary clay highly durable structures, which still remain today, after many centuries of use. To reinforce their constructions the architects used small rocks found in the desert, while the river sand utilised in the buildings absorbed moisture and made the rooms dry.

The northwestern part of the fortress was occupied by a large ruler’s palace with a court 180 m by 180 m in area. The majestic palace was fortified by three defensive towers 30 m high each, while inside the structure archaeologists discovered several large rooms, among which was the ‘Kings’ Hall’ – a sanctuary with 23 massive clay figures in it, and the mysterious ‘Hall of Dark-Skinned Warriors’. The mystery of the second hall is that, according to scientists, the ancient Khorezmians had fair hair and light eyes, although their skin was rather dark. 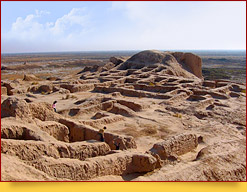 Remains of a large complex with a public temple of fire in the centre were found at the southeastern part of the castle. Not far from the temple complex there was a market square. The residential part (shakhristan) of the Khorezmian city was divided symmetrically by a main street with residential blocks on each side. Each block consisted of an uninterrupted complex of residential rooms, without any division into separate houses. The number of rooms in one such block might reach 200.

North of the fortress there was the Lower Palace, the ruler’s residence featuring a large park.

In the 5th century the level of crafts in Toprak-kala suddenly dropped, after which the people left the city and it turned into a large necropolis with a great number of ossuary burials. There are two versions as to why its inhabitants left Toprak-kala: for political reasons (the new dynasty that came to power at that time transferred their capital to the place where the present-day town of Biruni is located) or because the Amudarya (Amu Darya) again changed its course ceasing to supply water to irrigation canals. 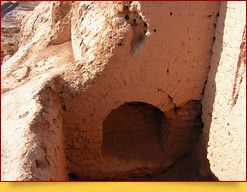 Archaeological excavations on the site revealed a large number of items testifying to highly developed culture and crafts in the territory of Toprak-kala: woollen and silk fabrics, fine ceramics, coins, skillfully made adornments of gold and glass, as well as articles of amber, shells and even corals. Inside the city there were workshops producing the famous Khorezmian bows.

Unique documents demonstrating the ancient Khorezmian written language were found in the southeastern part of the palace and are very interesting from the historical aspect. The documents have the form of boards or leather scrolls with inscriptions made in black ink. Although the artefacts have not been read through and translated completely, scientists are quite confident about their contents. These are papers from the palace archive reporting on the palace’s economy.

The Toprak-kala archaeological site is one of the few monuments of Khorezm in the territory of Uzbekistan that were excavated completely. The monument ranks among the oldest cultural places in the whole territory of Central Asia and occupies a prominent position in UNESCO’s World Heritage List.