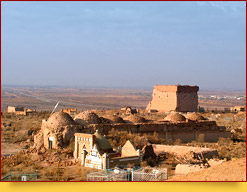 Grandiose ancient architectural ensemble Mizdakhan (IV century B.C. - XIV century A.C., XVII - XX centuries) is situated on hills, located along huge main tracks, leading towards Ustyurt plateau and Muynak, in 3-4 km to the South from Khojeyli town (“Khojeyli” is translated as “a land of pilgrims”), not far from Nukus in Karakalpakstan and occupies a large territory in 200 hectares. Mizdakhan is a huge ensemble of mixed-age antiquities and comprises one of the most ancient cemeteries in Central Asia (including the mausoleums of Shamun-nabi, Mazlumkhan-sulu, Caliph Erejep and a hillock of Jumart-kassab), and also a city of Golden Horde times, caravanserai, ruins of separate estates and palaces, remains of irrigation canals. During the period of Middle Ages Mizdakhan was a third large city in Khorezm.

Mizdakhan today is one of the most honorable Muslim shrines on the territory of Uzbekistan. In the ancient necropolis, traditions of Zoroastrism (Mazdaism, Zoroastrianism) and Islam are interlaced: old burial grounds, ruins of the Middle age mausoleums, swollen ruins of ancient constructions, which have only the very top now, as their most part is hidden under layers of time and send. Many historians consider Khorezm a motherland of Zoroastrism (Mazdaism), which appeared much earlier than Christianity and Islam. When you step on the ancient land of the people of Sun, local old residents will surely tell you, that the tomb of Adam and mausoleum, built up above it and called World Clock in this region, are located just right here. According to the legend, every year one brick falls out of these ancient walls, and when the last one touches the ground, the end of the World will come. However you will also see here a great deal of small pyramids, piled from fallen bricks by pilgrims. Every pyramid consists of seven stones, and people believe, that in this way they extend our planet’s life. 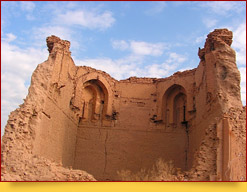 World religions are interlaced with each other in many things, and scientists suppose, that the tomb of Adam in Mizdakhan (Mazdakhan) is a burial place of Gayomardan (Gayomard, Gayamaretan) - the first man, created by Ahura-Mazda (God of Wisdom and Sun in Zoroastrism). In sacred book of fire worshippers - Avesta - the town of Mazda is mentioned, it was built in honour of Ahura-Mazda, where this first man was created. By the way, in Uzbek language the word “Adam” has still preserved its original meaning - “adam” from Uzbek is translated as “man”. Perhaps, just right here, on Chorasmian land, there was located heaven, where notorious paradise apple is still pronounced as a direct prohibition of God - “Do not take!” (“olma” from Uzbek is translated not just as “apple”, but also as a verb in negative form - “do not take”, “ol” means “take”, “ma” is a negative suffix).

Almost everywhere in Northern part of Mizdakhan it is possible to see ruined and buried ancient funeral constructions. Admirable from decorative appearance point of view half-underground mausoleum of Mazlumkhan-sulu (XIII-XIV centuries) is also located here; originally this underground building had strongly marked religious features. There is a legend, which tells, that once this place was a palace of khan’s daughter, named Mazlum-sulu. When the city was attacked by “infidels”, leader of the enemies fell in love with the girl, and she reciprocated his feelings. Infuriated governor killed his daughter and ordered to bury her in her own palace, which became a mausoleum. 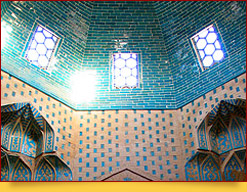 Another religious building, named after Caliph Erejep (IX century), represented a gorgeous construction, built from sun-dried earth and burnt bricks. It is known a legend about Caliph Erejep, who taught his subjects when he was alive, and his soul continued doing it after body’s death.

Shamun-nabi mausoleum (XVII - XVIII centuries) and Jumart-kassab hillock are also of a great interest. Inside the mausoleum of Shamun-nabi there is a massive tomb, 25 meters in length, which was built in honour of Saint Shamun-nabi. The legends, interlaced with Bible story about Samson, are connected with this place.

Jumart-kassab is a tumulus-shaped hill, 5 meters in height, which hides more ancient buildings. It is located near to Shamun-nabi mausoleum. A legend is connected with the hillock of Jumart-kassab (translates as “Jumart, the butcher”) about a good butcher, who was giving out meat free of charge to the poor in hungry years of bad harvest. For his unselfish kindness and sympathy for neighbors he was sanctified. There is a supposition, that these saint places are directly connected with ancient notions about Gayomard, mentioned above.