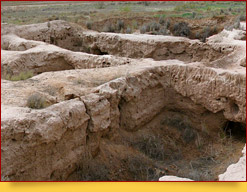 To the North-East from Turtkul town in Karakalpakstan there located ruins of outstanding monument of funeral and astral cult of ancient Khorezm, the settlement of Koy-Krylgan-kala (IV century BC - IV century AD) - one of the basic monuments of Zoroastrism on the territory of Uzbekistan.

Koy-Krylgan-kala fortress was a kind of temple-tomb, on which territory the astronomical investigations and some ritual ceremonies of Zoroastrism were held. People considered this place sacred and were bringing ossuaries with remains of the dead here.

Koy-Krylgan-kala (in translation it means “fortress of dead sheep”) is one of the few unearthed monuments of antiquity with original planning - the ruins of once powerful fortress have rounded shape in foundation. During excavations it was found a rich collection of antique works of art: statuettes, made of alabaster and terracotta, ceramic urns and ossuaries, stone seals, ceramic flasks. Fragments of wall paintings and monuments of ancient script of Avesta civilization in Central Asia are of particular interest.

The archeologist and ethnographer S.P. Tolstov writes the following about Koy-Krylgan-kala fortress in his book “In the footsteps of Chorasmian civilization. P.1.” (1948): 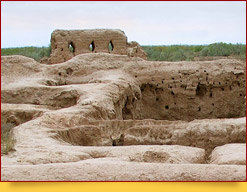 “Above the shatt there was raising fanciful delineation of ruins of the ancient fortress, which does not look like all those things we saw before. Half-ruined walls of eighteen-edged citadel were surrounded by a right circle of almost razed to the ground outside wall with remains of nine towers. The citadel walls’ edges, built from huge square sun-dried earth bricks, raising on 5-6 meters in height in some places, were cut with narrow and frequent slots of loopholes.
And inside and around the citadel there were innumerable fragments of vessels of magnificent manufacture and baking, surfaces of some of them were covered with red lacquer, others were decorated with slit ornament, which had a shape of corners and triangles, with further red, brown and black painting on pink-yellow background. Among the shards we found two-feathered bronze arrowhead of early Scythian type and a couple of terrakotta statuettes - headless figurine of a man, who sits, having bended his one knee under himself and putting his hand to another knee, and image of a woman, who sits on the back of fantastic animal, having lowered her legs to one side.
There was another epoch in front of us, the first monument of early Chorasmian antiquity…”

Initially Koy-Krylgan-kala was a round two-stored building with about 45 meters in diameter, surrounded by a deep fosse. The main temple was enclosed with two walls with shooting room, located in 15 meters from the central building.

On the first store of the main building there were eight rooms for holding religious ceremonies, which were covered with double arch. In upper rooms there were kept temple utensils and terracotta sculptures of gods. Inhabited constructions and storages were located inside the fortress.