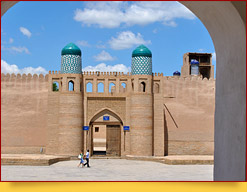 The city of Khiva which celebrated its 2,500th birthday 15 years ago can itself be called a large Uzbekistan sight. It was not just an individual Khiva monument that was included in the UNESCO World Heritage List in 1990 but the whole Ichan-Kala - ‘inner town’, the historical part of the city - with the suburb Dishan-Kala, which both have been Khiva for centuries. Among the numerous architectural monuments in Ichan-Kala stands out Kyunya-Ark Fortress - the heart of the ‘inner town’.

Kunya-Ark ‘old fortress’ was Khiva rulers’ residence and citadel. Every city in Central Asia had a similar fortified structure before the 20th century. The fortress had a developed infrastructure, in modern terms; it had anything for convenient living, administration, and entertainment of the khan, his family, officials and troops. Since the end of the 18th century the fortress had been a guarded “town in the town”; it was hidden behind its own castellated adobe wall, not to mention the 10-meter-high and 5-6-meter-thick fortification wall of Ichan-Kala itself.

The construction of Kunya-Ark began in 1686 by order of the last but one representative of the Sheybanids in the Khiva Khanate Khadaydad-Khan, Anush-Khan’s son, and lasted until the mid-19th century when during a construction boom in the city a lot of old buildings suffered from Iranian invasion in the 18th century were restored and reconstructed. 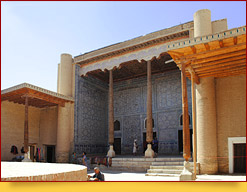 Only a few structures of the former khan’s residence survive: the eastern gate with the guard room, the kurinish-khona ‘reception hall’, Ak-Sheikh-Bobo Bastion, the summer and winter mosques and the harem.

In front of Kunya-Ark there is a square where the khan’s troops trained and paraded. It was also a place of execution. There was a zindan ‘prison’ attached to the eastern wall of Kunya-Ark. You can see what the prison conditions were and how it looked visiting its restored copy with dummies of inmates in it. On the left of the fortress gate there are guarding and storage facilities, stables and repair shops. A long narrow corridor leads inside the citadel. It connects all the yards with the entrances to all the rooms, chambers and halls of the fortress. The first yard was intended for envoys waiting for audiences with the khan. The second one was used for the fortress defending ordnance. The khan’s council gathered in the third yard. The forth one was the largest. It was called kurinish-khona (‘reception hall’) and was used for official receptions. It is part of the non-extant khan’s palace. The earliest kurinish-khona building dating back to the 1680s was destroyed by Iranians. Today we can see the surviving kurinish-khona built by order of Iltuzar-Khan in 1804-1806. Kurinish-khona had an iwan structure, a throne hall and side rooms on the western part of the yard: a treasury, an archive, a library with rare manuscripts, and lounges.

An iwan is a rectangular hall or space, usually vaulted, walled on three sides, with one end entirely open. The one in kurihish-khona has two pillars on stone bases. They are decorated with carved decorative patterns and poems of the writer and historian Ogahiy. Under a decorative semi-dome in the throne hall stood the throne. 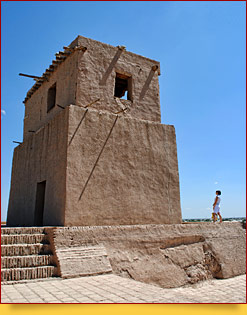 It was made of wood and covered with silver plates bearing decorative patterns and lines from the Koran. This throne is now housed in the Kremlin Armory in Moscow. When the khan received envoys of nomadic tribes, he used a yurt on a round platform in the center of the yard to show respect for them.

The door in the corner that is opposite the entrance to kurinish-khona leads to the harem built in the second half of the 19th during the rule of Muhammad Rakhim-Khan and to the hill Ak-Sheikh-Bobo with unusual adobe bastion where on the upper deck you can have a beautiful view of Khiva.

Besides the harem, they built a mint during the rule of Muhammad Rakhim-Khan. The necessity for it arose owing to the tax reform, setting up customs office and the need for coining golden money. In the mint you can see various types of money used in the Khiva Khanate: coins, silk and paper banknotes. There are also coining stamping dies, orders and medals exhibited in the mint today, and displays with dummies showing the mint in operation.

Almost at the time the harem was built they constructed summer and winter mosques in Kunya-Ark. While the winter mosque has little of artistic value, the summer one is worth admiring. It is a large iwan with two rows of wooden pillars, a mihrab niche (a niche indicating the direction of the Kaaba in Mecca), a minbar pulpit (a pulpit for sermons) and side towers. The whole interior is decorated with the traditional azure, dark blue, white and greenish majolica with beautiful plant patterns.

The gorgeous interior wall decoration and delicate carvings on the doors, pillars and balconies of the surviving Kunya-Ark structures makes you feel as if you are inside a precious jewel box; and the unique flavor and aura of the citadel help understand the mysterious Orient better. 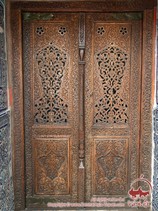 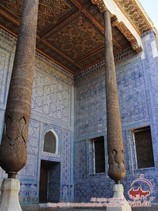 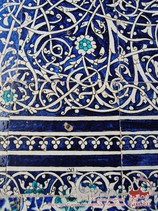 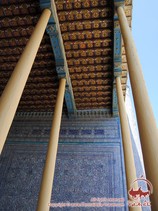 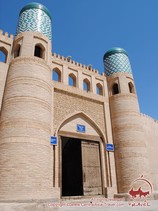 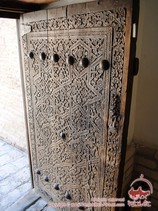 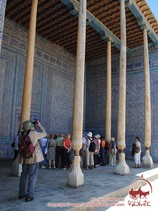 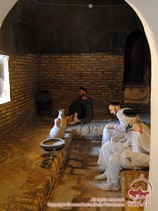 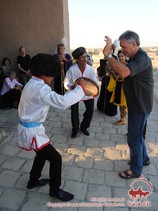 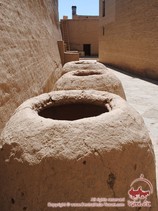 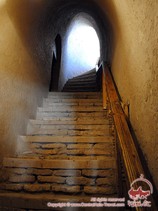 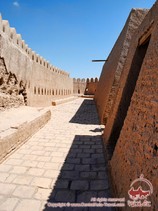 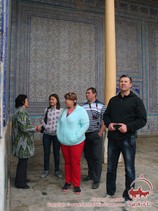 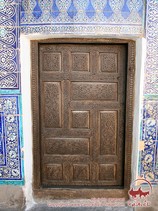 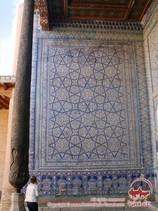 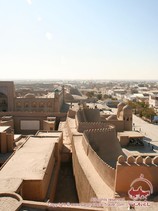 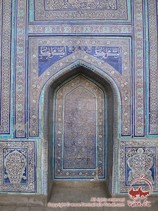 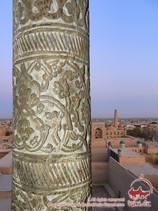 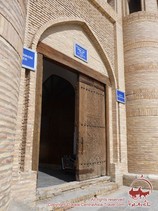 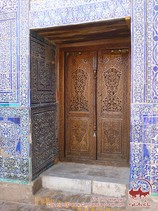 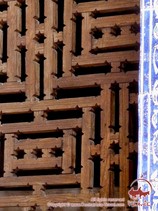 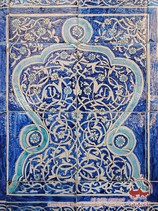