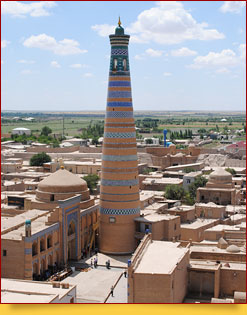 Islam-Khodja Complex is one of the pearls of Ichan-Kala - Khiva’s historical part, which was the first Uzbekistan’s site included in the UNESCO World Heritage List in 1990. Although the madrasah and minaret of the complex were built only in 1908 - 1910, they are the most prominent of Ichan-Kala, its landmark. The complex is famous thanks to the contrast between its Ichan-Kala’s tallest minaret and smallest madrasah, as the architect of the complex designed. Thus the minaret, visible at a long distance, looks even grander. At the beginning of the last century the minaret helped travelers to orientate themselves and find the way to the city faster.

The minaret of the complex draws most of the attention. Designed according to the architectural standards of the 14th century, the visibly tapering tower intended for calling the faithful to prayers was built by order of and financed by Islam Khodja - the first vizier (‘prime-minister’) of the Khiva Khanate under Muhammad Rakhim-Khan II (lived in 1864 - 1910). Later, during the rule of his son Isfandiyar-Khan, the minaret was to overshadow the famous Kalyan Minaret in Bukhara, and it can be said with certainty that the best Khiva masters of the time Khadaybergen Khodja, Bolta Vaizov and Ishmuhammed Khudayberdyev managed to do so. With the height of 56.6 meters, Islam Khodja Minaret is taller than Kalyan Minaret in Bukhara. Although the diameter of the minaret on the ground level is 9.5 meters, it appears light and svelte, which is thanks to bright inlays of azure, dark blue, white and turquoise majolica forming unique decorative pattern of horizontal lines around the trunk. They make the brickwork look much more elegant and compete with the beauty of Khiva sky on sunny days.

At a height of 45 meters there is an observation deck where the city spreads out before visitors. You can have an unforgettable view of Khiva with more than 60 architectural monuments if you get there.

The upper part of the minaret has a gunch stucco pandjara lattice windows, eaves and a small dome with a muezzin room under it.

The main entrance to the small Islam-Khodja Madrasah is right at the base of the minaret. Inside the madrasah there is a large hall under a vault, one tier of 42 hudjra cells around a small yard and mosque in the south-eastern part. The mosque is topped with a low robust dome; the mihrab niche (a niche indicating the direction of the Kaaba in Mecca) in it is decorated with majolica and gunch stucco ornaments. The entrance to the madrasah, with another floor over it, is decorated with majolica too; its patterns are of the same style and colors as those of the minaret.

Islam-Khadja Complex is truly one of the most beautiful Khiva sights. The first vizier Islam Khodja is remembered for his progressive views and establishment of the first European-type school in the Khiva Khanate, and yet more than this for his initiative to build such a beautiful and majestic complex so perfectly blending into the old Khiva architecture. 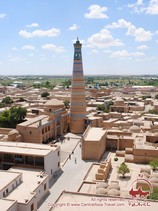 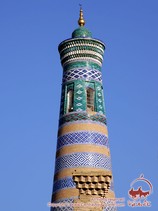 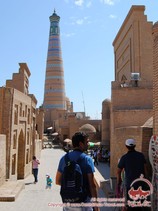 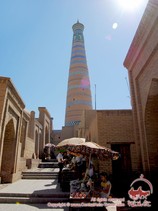 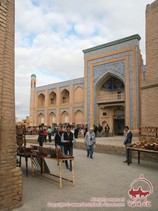 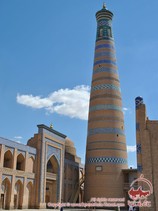 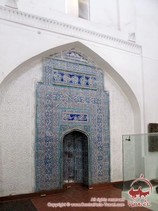 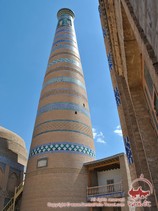 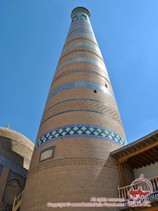 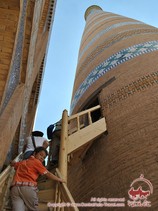 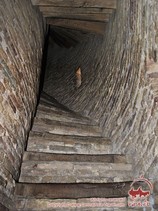