In the 16th с the Shaybanid dynasty came to power in Central Asia. They conquered Bukhara and designated it as their capital. Since then the city began flourishing, with a lot of construction projects initiated. The taki domed shopping arcades built in those times became the symbol of Bukhara and its significance as a Silk Road city. The arcades were built at busy crossroads and were means of controlled and convenient trade. An arcade had a large dome with shopping stalls and handicraftsmen’s shops. Today only four of those domed arcades survive and function. 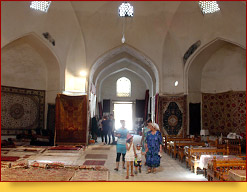 Taki-Sarrafon is located at a crossroads of two streets connecting the Registan Square with the rabat suburbs of the city. It was named after sarrafs - moneychangers, who were mainly Asian Indians in the past. Taki-Sarrafon was one of the oldest Asian currency exchanges. The dome of the arcade lies on four solid arches, with various structures added on to them. The arches are an example of the traditional Bukhara architectural style charzamin. Today there are no currency moneychangers under the dome of the arcade. Instead, there is an abundance of handmade Asian souvenirs, carpets, scull caps with gold embroidery, pendants, necklaces, richly decorated harnesses, tableware, etc.

Taki Telpak Furushon (‘headgear sellers’ dome’) is a six-sided arcade with a central spherical dome with openings. Around the main dome there were smaller domes of shops. Originally they sold books in the arcade, so it was first named Kitab Furushon (‘booksellers’ dome’). Later they sold headgear there. Various headscarves, scull caps, turbans and fur hats are still offered in the arcade. 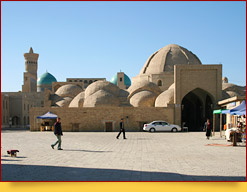 Tim Abdullah-Khan Arcade, built in 1577, is located north of Taki Telpak Furushon. The arcade features distinctive interior illumination the openings in the domes enable. It is always cool in the arcade whatever the weather is like. Today only part of this structure, once luxurious, remains. They have been selling carpets and textiles for years in the arcade, and today you can buy a real Asian handmade carpet there.

Taki Zargaron (‘jewelers’ shopping arcade’) is the northernmost and largest of the four arcades, located near Po-i-Kalyan Complex. It was the first domed shopping arcade built in Bukhara after it became the Shaybanid capital. They constructed it in 1569 - 1570. The arcade features an onion dome with vertical ribs. There were 36 shops in the arcade where they made and sold jewelry.