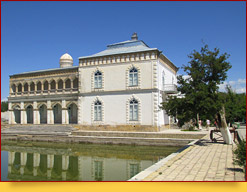 Located at a distance of 4 km from Bukhara to the north, Sitorai Mokhi-Khosa Palace was the countryside residence of Bukhara emirs just a short time ago.

In comparison with the rest of Bukhara, the climate in the palace is different: it is never hot there on even the hottest days. Such effect was reached thanks to the ancient method of locating the sites for important buildings. They put sheep carcasses at the likely construction sites and opted for the one whose carcass had least decomposed.

The foundations of the palace were laid by order of Akhad-Khan late in the 19th c, but the construction of the main part of it was completed during the reign of the next khan, Muzaffar-Khan, who designated the palace as his young wife Sitora-Bonu’s residence. The Bukhara master builders of the palace were trained in Russia. That was why the palace features a mixture of western and eastern architectural styles. The emir’s wife died young, and this was the reason for poetically naming the palace Sitorai Mokhi-Khosa (‘star-like and moon-like palace’).

The final parts of the palace were built during the reign of the last Bukhara emir Alim-Khan. They were the main gate arch, greenhouse, reception office, frontal terrace and a few other structures.

The decoration of the throne room called White Hall is especially attractive. It features the traditional ganch carving stucco-like traceries on a mirror background invented by the usto master Shirin Muradov. There is even a monument to him on the palace premises. 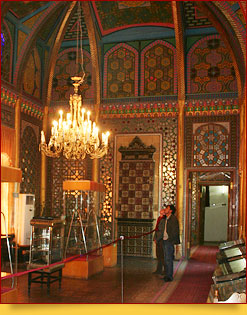 The reception rooms boast rich traditional murals on ganch stucco walls. Their unique feature is that their elements are never repeated in the rooms. Such decoration was made for the sake of the people who had to wait for the audience with the emir for hours - so that they could entertain themselves with examining the intricate mural designs for a long time while waiting.

The fantastic summer room or tearoom features unusual colored windows. Its walls were adjustable; they changed them depending on the season. Unfortunately, today only one set of wall survives. There is a large collection of Chinese and Japanese vases in the tearoom. They say the emir had a Chinese bowl, which changed its color if poisoned food was put into it, and he never started his meals without this precious utensil.

The mirrors in the palace interior are also very attractive. There are myriads of them inside: Venetian, Japanese with boiled glass frames and three-leaved with 40 reflections of an object or a person. They say they observed the tradition of putting any new concubine of the emir before a three-leaved mirror in the palace and told her she had as many competitors in the harem as the number of the reflections she was seeing.

There is also a guest house in the palace garden. It is called The Princess Olga’s Pavilion.

However, the princess Olga, the Russian emperor Nikolay II’s sister, never visited it. Its interior is extremely richly decorated. When the wall decoration of the pavilion was restored, they had to spend over four kilos of gold leaf. The pavilion looks much larger inside than outside.

Sitorai Mokhi-Khosa Palace today is a museum where you can see old palace furniture, Chinese and Japanese porcelain, various utensils, and a collection of the national dress of the 19th с decorated with the famous Bukhara gold embroidery.