Registan - a central city square - was a typical part of all the Central Asian cities. Bukhara had its Registan, too; it was located across from The Ark Fortress. 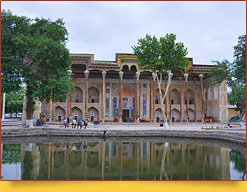 There were a lot of public buildings in the square: mosques and trade chambers; an administrative office and a hospital. However, only one of Registan structures has survived into the present. It is Bolo Hauz Complex.

Its construction began in the 17th сentury at the instigation of the Bukhara emir Shahmurad. He wanted to show his people he was not different from an ordinary man and decided to build a public mosque he himself was going to visit for Friday prayers.

Bolo Hauz means ‘children’s pond’. Water has always been short in Central Asia, so they used to build ponds serving as drinking water source for the population. Water carriers would take water from the ponds and delivered it in special leather containers to residential quarters and bazaars where they sold it. Bolo Hauz was one of these ponds. It had been there until the Soviet authorities decided to dry it in the early 20th century so as to prevent epidemics: the stagnant water in the pond was also a source of infection, but the locals still habitually used it. 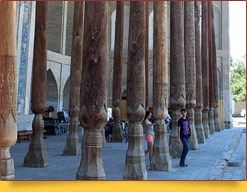 The mosque looks elegant and splendid, since it was built for the ruler’s visits. It features 20 pillars that hold its ceiling. The pillars are wooden and are all over covered with artful carvings. The local people also call the structure ‘the forty-pillar mosque’. It is not a calculation mistake; the 20 pillars are reflected in the pond, so there are 40 of them.

The mosque is over three centuries old but it still functions. Believers come to pray in it every day.

There is also a minaret standing next to the mosque. It was built much later than the mosque. The minaret is not tall, yet it shows Central Asian style elegance and luxury. It had a little tilt to one side for quite a long time, like the world-famous Tower of Pisa, and went on leaning. During the recent repairs they fixed and reinforced the structure; it is perfectly vertical now.

Bolo Hauz Complex is considered one of the most attractive Bukhara tourist attractions today. 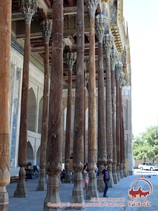 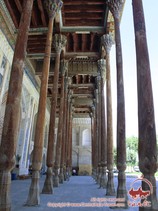 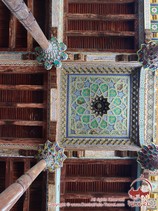 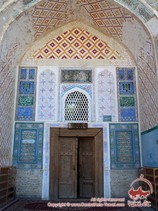 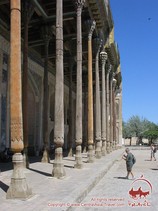 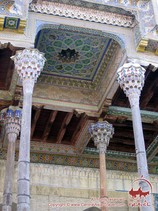