The Ark Fortress is one of the most interesting Bukhara historic buildings. Its foundations were laid in the 4th - 3rd centuries BCE. The fortress has been, of course, several times destroyed and rebuilt. Until 1920 it had served as Bukhara rulers’ residence. 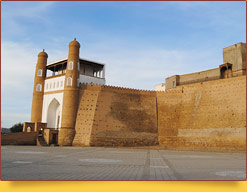 The fortress stands on an artificial hill of up to 20 meters in height. The approximate area of the site is 4.2 hectares.

The architects of the fortress planned to make it polygonal. According to legend, the base of the fortress had seven pillars set up as to the locations of the Great Bear brightest stars. The say the builders succeeded in constructing the walls of the fortress only when they put the base pillars in this order.

Although the fortress was quite strong and many khans were safe in it, it was completely destroyed and remained ruined for a long time until Bidun, one of Bukhara rulers, rebuilt it in the 7th century. During the rule of the Samani dynasty in the 9th - 10th centuries the fortress was thoroughly reconstructed. They added watchtowers and made its walls twice as thicker.

When Genghis Khan’s troops entered Bukhara in the 13th century, its residents took shelter in the fortress. The troops could not get inside it for a long time but finally succeeded. The defenders were killed; the fortress was ransacked and destroyed. 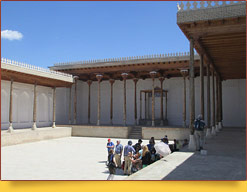 During the rule of the Shaybanid dynasty in the 16th сentury the fortress was rebuilt again; its original look was restored. Besides, they built a new eastern gate called Gurian (destroyed by the end of the 16th century) and a new western gate called Registan (still surviving and letting Bukhara’s guests in).

The structures that survive inside the fortress date back to the times of Ashtarkhanid and Mangit dynasties. During the rule of the Ashtakhanids they built the hall Kurinish-Khona where the ruler sat, and Jami Mosque. Under the Mangits they built the prime-minister courtyard Kushbeghi-Bolo, the greeting yard Salom-Khona and the horse yard Saees-Khona.

Famous Central Asian scholars and writers, such as Ferdowsi, Rudaki, Al-Farabi (known as Alpharabius in the West), Ibn Sina (known as Avicenna in the West) and Omar Khayyam lived and worked in the fortress. According to Avicenna, there was a unique library kept in the Ark. Unfortunately, the library was gone after one of the destructions of the fortress.

At the beginning of the 20th century the Ark was like a city in the city of Bukhara. The fortress housed the ruler’s palace, high officials’ homes and various government offices. Over 3,000 people lived in the Ark then. 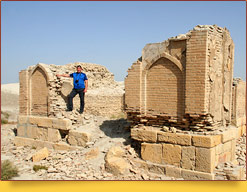 The fortress was last seriously damaged in 1920. The Bolshevik troops led by Mikhail Frunze laid siege to the Ark, trying to defeat the last Bukhara emir Sayyid Alim-Khan. Mikhail Frunze ordered that the fortress be bombed by aircraft. The eastern part of the Ark was ruined. Today this part contains an archeological reserve and two surviving structures: Childukhtaron Mosque built in memory of the 40 girls killed by Nassrullokhan, and the Sufi monastery Battol-Ghozi Khanaqa.

There are a lot of legends about the Ark. According to them, the epic hero Siyavush (also spelled Siyavash, Siavash), a Persian prince who because of his stepmother’s mean plot exiled himself to Turan (Central Asia), built the fortress. Once, walking about a bazaar, Siayvush saw a beautiful girl he fell in love with, and his love was requited. However, her father, the ruler of Afrasiab (also spelled Afrasiyab), agreed to permit them to marry provided that Siyavush first built a palace on a bull’s hide. Everybody thought it was impossible, but the quick-witted young man cut the hide into thin strips, stretched them, tied up their ends, made a large figure from them on the ground and built a palace within its perimeter.

The Ark Fortress is a large museum now. It has a history department covering various periods from ancient times to the present day, a numismatics department with a collection of rare old coins, and Bukhara Province Nature department. 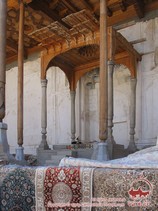 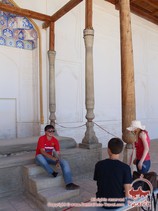 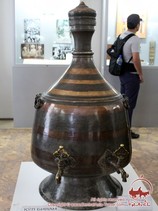 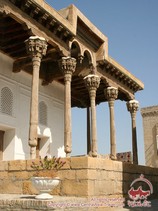 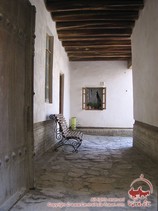 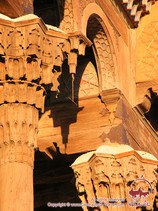 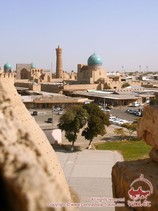 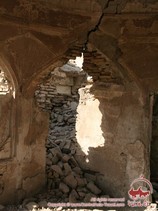 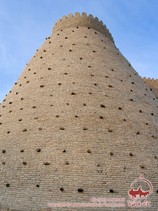