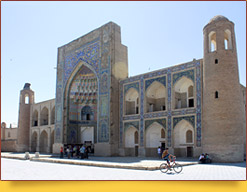 Built in 1652, a few centuries later than Ulugh-Beg Madrasah (built in 1417), Abdulaziz-Khan Madrasah, which stands across from it, is an integral part of Bukhara’s most outstanding architectural ensemble. Abdulaziz-Khan Madrasah marks the remarkable progress of medieval Central Asian architecture; it shows us how amazingly high the skills of Central Asian architects, builders and artists were at the time.

Abdulaziz-Khan Madrasah is often compared with Ulugh-Beg Madrasah, since they are a duet of completely different structures of different times. Ulugh-Beg Madrasah, built during the reign of the Timurid dynasty, is moderate in size and decoration, while its counterpart is grand and ornate.

The pishtaq portal of the madrasah is amazingly high and splendidly decorated. The iwan gateway has many facets and ornamental stalactites. While the iwan of Ulugh-Beg Madrasah is plain and has inscribed citations from the Koran, Abdulaziz-Khan Madrasah’s is covered with verse lines of famous poets.

The decorative patterns of the latter are also different. They are not precisely geometrical or astral, as it was common; they are bright and rich wavy plant designs. 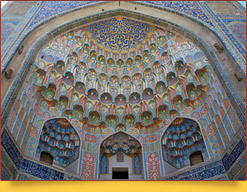 There are even images of a Chinese dragon and a mythical bird called Simorgh inside them, which is a sign of Bukhara’s close relations with Silk Road kingdoms at the time. The walls and chambers of the madrasah show almost all the decoration techniques used in those times: relief majolica, marble carving, tile and brick mosaic, wall painting and even gilding.

The summer and winter mosques in the madrasah are also splendidly decorated. The winter mosque is in the western corner of the entrance hall; the summer mosque stands right in the courtyard. The darskhona classroom features beautiful murals in blue on a white background. They depict landscapes like those of Chinese or Indian paintings.

However, they did not complete the decoration of the madrasah. The right part of the yard and the left side of the façade remained unadorned because a political coup took place in the country while Abdulaziz-Khan was away, and no master who could complete the work stayed there after it. 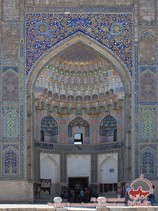 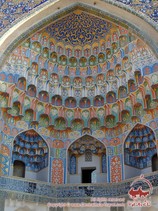