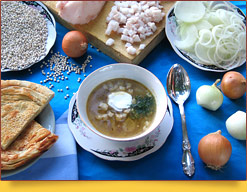 Shurpa (also spelled shourpa, shorwa, shorpo, сhorba, shorba, shorpa, shorpo, sorpa) is a rich and thick soup that will help you enhance your physical power and regain strength if you have lost it, ranks among the foremost first-course dishes of the Uzbek cuisine. There are two main types of this dish - kaynatma shurpa and kovurma shurpa, which differ mainly in the way of their preparation; however, there actually is a great variety of recipes of cooking shurpa, as each region of Uzbekistan prides itself upon its own specificities and secrets.

Kaynatma shurpa (Uzbek ‘kaynatmok’ - ‘to boil’) is a diet dish consisting of only meat broth and boiled vegetables. Kaynatma shurpa will appeal to people from northern countries, where the base of the soup is almost never fried.

To cook shurpa you will need:

The ingredients listed above can be found in almost all shurpa recipes, and the only thing that makes all the types of this dish differ from each other is the way it is cooked. Put large pieces of meat and bones into cold water and boil them for 1.5-2 hours. As the water starts to boil, turn down the fire. Then take the meat and bones out and separate the meat from the bones. Cut the meat into small even pieces and put them back into the broth. Now add vegetables cut into large pieces and boil the soup on small fire so that the vegetables can gradually become soft and give the soup all their taste. The sour tomatoes may prevent the potatoes from boiling up properly, which is why the tomatoes should be added at the end of the cooking process, together with herbs and spices. 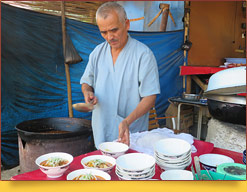 After being finished, the shurpa can be portioned out in traditional bowls (kosa), with a handful of fresh herbs put in each bowl. Shurpa can also be served separately, that is, broth in large bowls and meat and vegetables in a dish.

Kovurma shurpa (Uzbek ‘kovurmok’ - ‘to fry’) requires the same ingredients, but is cooked in a cauldron, as the meat should first be fried together with onion and carrot. Then water is added, and after the meat is ready, vegetables are put too.

There is also a type of shurpa with chickpeas (nokhat) - mokhara shurpa. The chickpea is a Central Asian type of pea, large-sized, which does not become soft even if boiled for a long time. Chickpeas should first be kept for some time in cold water and then boiled with meat.

There are a great number of methods of cooking shurpa! Asy-sorpa is cooked with fish, while kikhta shurpa features meatballs instead of cut meat.

As shurpa is a rather fat soup, it should be served with bread, better with the hot, aromatic traditional Uzbek bread.