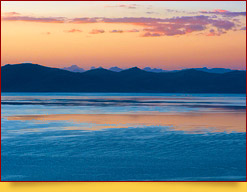 Son-Kul Lake is a picturesque alpine lake situated in the midst of Tian Shan mountains; its name translates as “The Last Lake”. It is located at the altitude of 3016 meters above sea level and its depth reaches 22 meters in some spots. Son-Kul is the largest natural freshwater body in Kyrgyzstan.

The lake is situated in a mountain plain surrounded by meadows. These meadows, or zhailoo, as the locals call them, have been used as grazing fields for livestock since the ancient times. Numerous petroglyphs found at the shore of the lake are the evidence of that. Local shepherds bring livestock to the lake for the summer and stay in yurts (traditional Kyrgyz felt dwellings) with their families.


Tourism
Son-Kul is a potential ecotourism spot. The nearest settlement is the Chaek village. 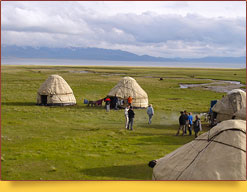 Son-Kul Lake: Since the beginning of times, the settled regions around the lake have attracted shepherds from Kochkor, Naryn, and At-Bashy in the summer. That is why the tourists visiting the area can luckily experience multiple colors of the Kyrgyz culture: not only do they get to stay in a national dwelling – yurt, but they also have a chance to satisfy their thirstiness with the traditional Kyrgyz drink – kumis. It is made of mare milk in accordance with the special technology and has a vast number of health benefits.

The lake which basically “stepped over” 3000 meters of altitude is the biggest motivator to visit this region, and the beauty of scenery and incredibly clear fresh air, which will be just the best cure for your mind and body, will only strengthen your interest. There is nowhere else in the world that you could find a similar experience and our company would gladly make this spiritual healing trip possible for you.


Climate
Because of the low temperatures, large amounts of snow precipitation – snow covers the fields of the region for roughly 130-160 days a year, and road closures, Son-Kul is unavailable for tourism during the winter months. Summertime, however, greatly makes up for it: the air is clean and clear, the temperatures are comfortable enough to spend time outdoors and in the sun, water temperatures allow for some swimming and other water activities.

The inhabitants of Son-Kul
The eastern side of the lake is part of the Karatal-Japyryk Nature Reserve. On this shore your will not see tall trees, spruces, or firs, nevertheless, it is only on this 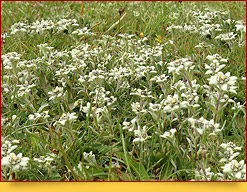 part of the shoreline of Son-Kul that you will be able to enjoy scatterings of edelweiss (which is included in the IUCN Red List), as well as many other colorful exquisite and surely very rare flowers. These flower fields slowly transition into alpine meadows when you travel higher up the valley.

Apart from that, the shoreline is home to 66 waterfowl species, most of which normally spend summer months in the area. To give you an idea of how vast the variety is – the count of duck species alone is 14.

In is worth mentioning that there had been no fish in Son-Kul up until it was specifically brought into the lake is 1959. Currently, the lake is inhabited by such types of fish as: coregonus, broad whitefish, peled, schizothorax, cyprinid, diptychus, scaly osman, Diptychus sewerzowi, Nemacheilus dorsalis, and cobitidae.

The lake of many myths
A legend says that at some point in time the spot where Son-Kul is located now was a cruel khan’s habitation. To expand his harem, he would gather the most beautiful girls from the whole Tian Shan region. The mountains were so touched by the suffering from cruelty that khan’s wives had to endure, that the place where khan’s palace once was situated has dropped down of pity to these women and water drowned the whole territory. A majestic lake has been formed, bearing in itself all the beauty of the many women who were held captive by the khan.