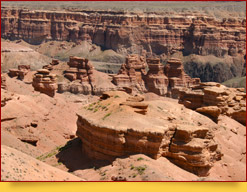 If you are in Kazakhstan on  business or on vacation, carve out at least one day in your schedule and visit the Charyn National Park .The magnificent park is located in the east of the Almaty region on the Kazakh-Chinese border. Even a short trip around the park will leave a lasting impression.

The Charyn Park was created in February 2004 and on the territory of the Ili intermountain basin. It gained world fame thanks to Charyn Canyon, which also is called the younger brother of the Grand Canyon in the United States. Although it is smaller in size, it is not inferior to the Grand Canyon in the variety and magnificence of the landscape. There are other natural monuments in the park, for example, the unique relict ashen grove that survived the ice age, located in the lower reaches of the Charyn River.

You can get to the park from Almaty.  If you take decision  to go by car, you had better travel in an SUV. A path of 200 km lies through a rather deserted foothill  plain. And when, you begin to yawn out of boredom being tired of the monotony of the landscape 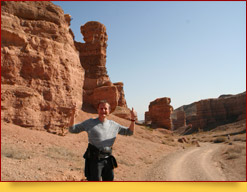 suddenly the fantastic silhouettes of Charyn Canyon arise before your eyes as if this grandiose rift in the middle of the endless Kazakh steppe was created with just a wave of a magic wand.

When you reach the canyon, continue driving along the winding dirt road between steep cliffs and abrupt crags. The road leads you to the most unusual and picturesque part of the canyon called “The Valley of Castles”. The very narrow valley with width from 20 to 80 m stretches about 2 km. It has almost vertical slopes that reach 300 m. It is here where the ingenious architect – nature has created unique giant sculptures and painted them in different shades of red. In the depths of the valley you experience strange feeling that you got to a fantastic city, where new discoveries would await you at every turn. Here your inspired imagination easily would transform stone cliffs into magic castles, medieval towers, fabulous fortresses,  giants’ faces  and mysterious silhouettes of animals. Go up along a narrow path to the observation deck, there are several of them, and enjoy the bird's-eye view of this fabulous city. 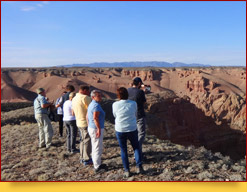 If it is possible, come back here at sunset.The rays of the fading sun transform the gigantic sculptures, adding richness to their reddish tint.   The landscape becomes even more surreal, giving the valley a mysterious look.

After leaving the valley, walk down on a  path to the Charyn River.  Here you will find life-giving coolness.  Right by the water there are small charming poplar groves, you can relax after a long day in their  shade.  However, the calmness of the river is  deceptive. “Charyn” means in translation from Turkic “full-flowing, stormy”. A wayward river has   many steep rapids. For experienced rafters  river descent will be an incredible adventure.

Forefathers endowed these places with mystical power. According to legend, in the "Witches' Gorge" delayed travellers who stayed here after sunset were stalked by insidious witches. 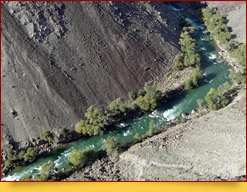 The witches’ ominous laughter frightened them to such an extent that in despair the poor fellows rushed down from the abrupt cliffs into a bottomless abyss. In fact, on a windy day, in the gorge you can hear strange frightening sounds similar to creepy laughter. However, there is a logical explanation of this natural phenomenon.  The sedimentary rocks of the "Witches' Gorge"   have many through holes, turning them into giant wind instruments.

It is obvious that it was not evil spirits who are guilty of the missing travellers.  In the rocky labyrinths it is easy to get lost or to fall off the ledge. Danger is also hidden in the stormy waters of Charyn. If you travel on your own, it is better to take a local guide who knows the park well. So you can fully enjoy what is hidden from the uninitiated sight in this amazing park.