The choyxona (teahouse) is one of the synonyms of Central Asia, it is the soul and the East’s peaceful breathe, and an inseparable part of the colorful bazaars and quiet streets’ home-felt corner. 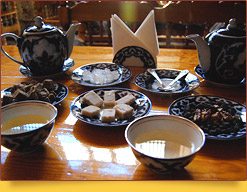 Tea drinking in the East, tea meals, a rest with a short prayer, one-hour “meetings” with a hot teacup -piala are a separate page in the interesting Eastern culture, which can be described endlessly.

Traditionally, it has so happened from time immemorial, they drink tea in teahouses. This is a place where time stops and everything plunges into peace, tranquility and heart-to-heart talk, you hear quails’ unobtrusive hubbub, playful laughter of people talking. The choyxona is not just a “tea room” where you can eat and drink tea. For a long time, the tea house has been a place where people came to tell and listen to the latest news and rumors (when there were no newspapers and telephones), discuss plans for the future with friends slowly, play backgammon with neighbors, conduct serious “business negotiations”, mark notable events  etc.  Those living nearby visited it regularly, and if a traveler dropped in, it was a special evening, as a wanderer could spend hours talking about other countries and different ways of life. 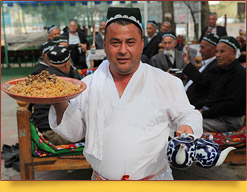 It should be noted that in the East, mostly men attend teahouses, and in past times, it was a very strict rule - a woman’s visit to a choyxona teahouse was considered extremely inappropriate. Women gather for their “gäp” at home. "Gap" (pronounced "gap") literally means "conversation" - so called "gatherings", when a monogamous company, similar in age and interests, come together to pray, drink tea and talk about all the essentials.

They started building teahouses in Central Asia ever since tea, caravanserais and bazaars appeared, and no one remembers the first entrepreneur invented and opened a teahouse. The choyxona owner has always been considered a much-respected person; nevertheless, he could drink tea along with everyone and talk with visitors.

Choyxona’s modern look, of course, is very different from what it was before. To understand the specifics of the choyxona better, let's go back to the depths of the centuries and, using the example of Old Tashkent, imagine a visit to the old-time choyxona.

In the second half of the 19th century, many travelers and researchers visited this area and found almost everything here to be unusual. They brought the most vivid impressions into their travel journals and books. Therefore, there is a choyxona teahouse among these descriptions. Teahouse could be found on almost any street, in caravanserais, on intercity roads and, of course, in the bazaars. As well as it is now, they were of different “classes” - from a small cramped room to a respectable multi-room with musicians.

The scale of the teahouse was not standard, it depended on the owner's viability, attendance and location of the teahouse, but the principle remained the same. 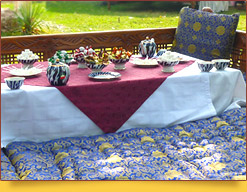 In small teahouses, the owner could be both a cook, a waiter, and a janitor. Usually sons, nephews and other family members helped him. When the teahouse grew to an impressive establishment, the staff also increased in proportion: waiters, cooks, cleaners, musicians, etc. were invited.

As a rule, a teahouse was built in the shade of trees, near a pond with cool water. In summer, trestle-beds were set up on the nearby street, and those who did not get a place on the trestle-bed sat in the teahouse's premises. In winter and in the rainy season, they all relocated inside. At the entrance to the teahouse, the visitor was greeted with a “crowd” of shoes - it was necessary to take off footwear on the threshold and go inside barefoot. The floor of the teahouse was clay covered with felt. Visitors would sit on the floor, cross-legged, and those who occupied the trestle-bed could enjoy more comfort - leaning on mattresses and kurpachas at a small dastarkhan.

The main attribute of the teahouse was a samovar - the “head” of small teapots. The size and novelty of the samovar talked about many things, and it was, so to speak, the choyxona’s business card. The samovar, as a rule, made in Russian town of Tula, took the most prominent place. There was a stove with a flat lid nearby heating an army of kettles. They stoked the stove and the samovar with coal, in the cold season they were excellent room heaters. Next to the stove, a large earthenware vessel was dug into the ground, and ordinary arik water (taken from small streams running through the town streets) was stored and refined in it (at that time pure water flowed in the ariks and was used for drinking). The samovar was filled with this water, and then tea-kettles were filled with boiling water. As the samovar was used, it was replenished with water from earthenware vessel. 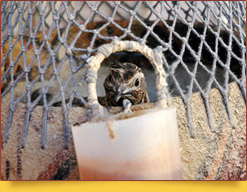 In order to create coziness, more respectable tea houses had musicians playing (from solo and duet to a small orchestra - quartet). National instruments monotonous melody removed vanity from thoughts, and made to do everything slowly, fully surrendering to rest and the world of tea drinking. For many centuries, choyxana has enjoyed year-round demand - in winter they warm themselves with hot tea, and in hot summer, they escape from the heat by the hot tea as well. Unfortunately, today in makhallas it is hard to find a true, old teahouse - new-fashioned cafes and restaurants drove them out; the architecture and service changed, electric kettles replaced coal samovars long ago. However, the flair remained – one can still meet a trestle-bed covered with kurpachas near arik or a reservoir with cool water, and drink hot tea, listening singing quails (bedana) and enjoy the atmosphere of a leisurely oriental hospitality.