«… perhaps, the colour and pattern of a carpet are connected with the national music, expressing it in lines and shades.
Possibly, carpets are nothing but the notes of this music, which a knowing person can turn into an ancient melody.»
(P. D. Uspensky, «In search for the wonderful») 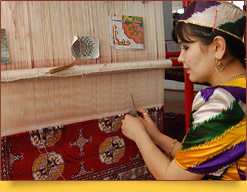 There is a popular Uzbek saying: "The home begins where a carpet is spread". Carpet is a symbol of a family's wealth and prosperity, and therefore, it is always included in presents given to young people at their wedding. The carpet is highly esteemed in the East, adorning the walls and the floors of houses. Spread on the floor, it keeps one’s feet warm, while put on an iwan, it forms a nice place for rest in the open air.

The production of carpets has a long and interesting history. There is another quotation from P. D. Uspensky, who called the carpet patterns coded musical notes:
«… carpet weaving is one of the most ancient forms of art. Carpet making in some regions of Asia is connected with old customs. For instance, a whole village could work upon one carpet. In wintertime, in the evening, all the villagers gathered in one large room and, divided into groups, were standing or sitting on the floor in a particular order, which was well-known and had been determined by a tradition. Some were picking small stones and chips from the wool, others were beating the wool with sticks, the third were carding it, the fourth were spinning, the fifth were dying and the sixth or, perhaps, twenty sixth were weaving a carpet. Men, women and children of every age were working to the accompaniment of traditional music and singing. The people were working and dancing to a particular tune, all their different movements joining up to form one made to a certain rhythm. Besides, each region had its own music, its own melody, its special songs and dances, which had from the very ancient times been connected with carpet weaving…» 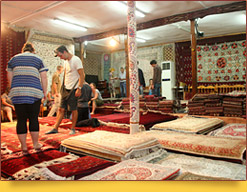 In Uzbekistan the development of this art was encouraged by the large amount of available material: sheep and camels, whose hair was used in carpet making, were largely bred in the territory of Uzbekistan. At first carpets were simple and primitive. However, in course of time, the technique grew much more complicated and the range of materials used much wider, which resulted in the appearance of a wide variety of patterns. The art is continuing to develop in our days.

Traditionally, each region of Uzbekistan has its own secrets and methods of carpet weaving: a unique decorative pattern,a special technique used, an original composition. The thickness of the pile, too, can tell about the place the carpet was made in. On this principle they are divided into «julkhirses», «gilams» and «pileless» «carpets».

Gilams or thin-piled carpets are usually bright red-brown, with inclusion of small elements of other colours. Usually their design has simple geometric forms. The production of such carpets is centred in Bukhara. Gilams produced in Samarkand are considerably different in colour. They are characterised by a domination of shades of blue and yellow; their decorative patterns are usually formed of three medallions in the middle and Greek «meander» running along the perimeter.

The thick-piled carpet «julkhirs» is a combination of a monumental compositionwith rather simple ornamentation. This type of carpet has more features originating from the ancient traditions. It is often woven by country women with the help of stone or wooden spindles. The thick and rough yarn makes the carpet soft and furry, and rather light at the same time. 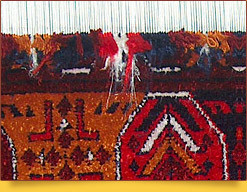 Koshma is one of the earliest typesof carpet, made of camel and sheep wool. In design it may be simple, without patterns, used for covering the floor of a yurt, as well as ornamented, meant for decoration of a room.

Today there are three methods of production of carpets used in Uzbekistan: handmade carpets, those made at a plant and carpets made at a small private factory. They all produce high-quality articles conforming with the world standards and, certainly, reflecting the traditions and customs of the region.

Handmade carpets are produced in the Fergana valley, Samarkand, Nurata, Kashkadarya, Surkhandarya, Syrdarya and Karakalpakstan. The carpet weaving and carpet trading are centred in Samarkand, Urgut, Kokand and Khorezm, which offer the widest variety of carpets.