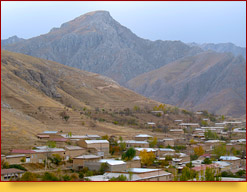 Urgut is a small town in Samarkand province (oblast), Uzbekistan, some 50 km southeast of Samarkand (Samarqand). Urgut is situated at the foothill of the Zeravshan Range, at an elevation of 1,000 m above sea level, close to the border with Kashkadarya province. Formerly a large village, in 1973 it gained the status of a town, and today it is the administrative centre of Urgut district. The town’s industry includes several carpet weaving factories, a slate producing plant, and a subsidiary of the British-American Tobacco Company.

Since ancient times Urgut has been a major centre of traditional crafts, which makes it a very attractive place for tourists.

Urgut is also the site of the largest oriental bazaar in Samarkand province, where you can buy old and modern works of people’s craftsmanship. The principal market days are Saturday and Sunday, when you can buy carpets, pieces of handmade embroidery (suzani), leather shoes of various types, jewellery, different metal articles, ceramic kitchenware, wooden trunks and the widest range of other things. Right there, inside the market, there are a large number places where you can partake of pilaf (also spelled plov, pilaff, pilau, pilav, polow, pulaw, pulao) and manty (mantu), the main dishes of the Uzbek kitchen.

On the outside the bazaar is surrounded by blacksmiths’ and tinsmiths’ workshops and shops trading in national clothes.

Pottery is another type of craftsmanship that reached a high level in Urgut. It is remarkable that the colour and shape of an earthen vessel can tell in what part of Uzbekistan it was made. For instance, blue, white and green are the colours of Khorezm (also spelled Khwarezmia, Khwarizm, Khwarazm, Khwarezm, Khoresm, Khorasam, Harezm, Horezm, and Chorezm) and the Fergana valley, while yellow, green and brown are characteristic of Samarkand. The main colours of ceramic articles from Urgut are mustard, gold and pale yellow. The home of the Oblakulov family in Urgut is, doubtless, a place worth visiting. The last seventeen generations of the family have been engaged in production of fine ceramic articles on a potter’s wheel. There you can see a complete process of making a clay article, and also acquaint yourselves with artistic embroidery with threads dyed in natural pigments. 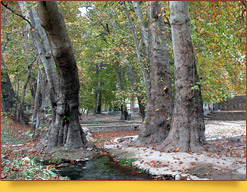 The ancient garden Chor-Chinor (translates as ‘four plane trees’) is one of the most interesting places in Urgut. The garden is a depression between hills shaded by fiftyvery old plane trees that feed on waters from a holy spring. Each tree is provided with a plate informing us on their approximate age, which ranges from 800 to 1,800 years. Some of the elder trees measure 10 m in circumference. Today it is hardly possible to say which of those gigantic trees were the first four specimens that started the famous garden.

A natural cave has been formed between the roots of one of the largest plane trees. The base of the tree forms the ceiling, and the whole space of the cave is situated under the ground. In some parts the walls are reinforced with brickwork, and the entrance is blocked with a carved door with a lock. A special man, the keeper, unlocks the door for the visitors. This wonderful tree can accommodate up to ten persons. However, it is best to stay there alone or in company with close friends, as, according to a legend, did Sufis, secluding themselves for group prayers or theological discourses. 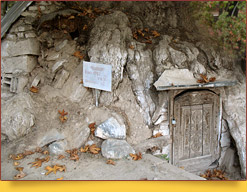 This is the name of a mysterious plateau concealed between the spurs of the Zeravshan Range near Urgut, 30 km away from Samarkand.

Shaytan Jiga is an extent area of granite formations stretching for tens of kilometers from the springs of Mirankul to the village of Karatepe. The plateau is easily recognisable, some of its rocks resembling figures of earthly animals, such as the bear, tiger, frog, lizard or bird, others looking more like fabulous creatures - dancing daemons, crawling dragons and ancient gods created by an experimenting sculptor. There is even the head of a giant, similar to that from Easter Island.

Old people say that the place is evil. Indeed, it evokes images of pagans and witches making their sacrifices or of fabulous warriors fighting furiously until the sky broke down upon the earth and caused a terrible earthquake that turned the mountains into a heap of rocks. However, the fact is that the lines have been naturally shaped by an everyday work of the rain, sun and wind. 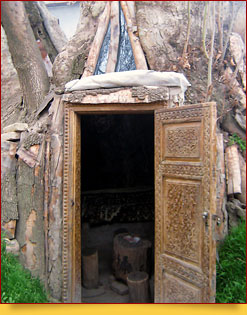 In search of a temple

In one of his works titled ‘The Book of Routes and Countries’, Abu Kasim Muhammad ibn Khaukal, a 9th-century Arab geographer who visited Samarkand, told about a monastery of Iraqi Christians situated in Shavdara (hills of the Zeravshan Range), on an elevated site known under the name of Urgut. According to ibn Khaukal, the monastery, possessed inalienable property (vakf).

A number of archaeologists made attempts to find the monastery. However, the one who succeeded was the young orientalist Alexei Savchenko. The archaeological work continued, with intervals, from 1997 to 2005. The archaeological excavations revealed a baked brick construction, typical of the Samanid and Karakhanid periods (9th-11th centuries), an arched vault that had collapsed and a metal cross resembling a ceremonial one. The building was oriented to the points of the compass, which was characteristic of Christian constructions.

Probably, it was the changing political situation in the Iranian Empire and the ideological tolerance of the Sogdians that made people build a monastery in Urgut. According to ibn Khaukal, the monastery in Urgut was established by people from Iraq, probably, members of an enormous Christian community that existed to the east of the Euphrates. Those people called themselves Representatives of the Eastern Church and professed Nestorianism.