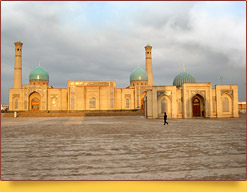 Thoroughly restored in 2007, the historic buildings of the complex, with the earliest of them dating back to the 16th century, show their original splendor now. The new mosque featuring traditional Islamic architectural elements adds to the grandeur of the site.

The complex was named after the 10th-century Islamic scholar, one of the first and highly esteemed imams of Ash-Shash (Tashkent’s former name) Abu Bekr Al-Kaffal Al-Kabir Ash-Shashi (also spelled Abu Bakr Al-Qaffal Al-Kabir Ash-Shashi). He was famed for his immense knowledge of the Koran, Hadith, and Islamic law; his writings were an outstanding contribution to Islam. He also wrote poems and songs, some of which survive, and was a master locksmith besides (hence they nicknamed him Kaffal ‘locksmith’).

Kaffal Shashi became an Islamic saint after his death in 976. His grave by Ash-Shash city wall in Bogi- Keykaus Garden became a pilgrimage place. In the 16th century a mausoleum was built over the grave, and the area around it, with a cemetery stretching to the south, was named Khazrati Imam (‘saint imam’). 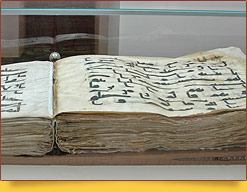 However, the most prominent structure of the site in the 16th century was Barak-Khan Madrasah. Two other mausoleums and a library with a lot of manuscripts of ancient Asian authors were parts of the architectural ensemble it led.

Tilla Sheikh Mosque (‘golden sheikh mosque’), standing opposite Barak-Khan Madrasah, was built in 1856 - 1857. It is still a functioning mosque, featuring minarets, a praying hall, a library and household facilities. There is also an iwan (a gallery-like structure with one side or two sides entirely open) added on to the mosque to pray outdoors. The hall has a mihrab decorated with carvings (Mihrab is a niche in the wall of a mosque that shows the direction of the Kaaba in Mecca and hence the direction Muslims should face when praying.) and a minbar pulpit. The windows of the mosque feature beautiful traditional Central Asian panjara stucco latticework.

Muyi Muborak Madrasah (‘sacred hair madrasah’), built in the 16th century too, is said to have some hair of the Prophet Muhammad’s hair preserved in it. Besides, it is famous for the great Islamic relic kept in its library, the Uthman Koran (also known as Samarkand Kufic Koran, Samarkand Codex, Samarkand Manuscript and Tashkent Koran; also spelled Osman Koran). This codex, in Kufic script, dates back to the 8th century and is believed to be the world’s oldest Koran copy. It once belonged to Uthman ibn Affan, the third Caliph (of the four Righteous Caliphs who succeeded the Prophet Muhammad), and still has blood drops on its pages… 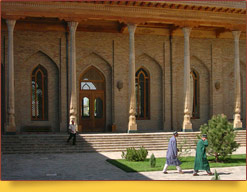 According to legends, the manuscript was brought to Samarkand from Iraq by either Tamerlane (Timur) or the famous Sufi Khodja Akhrar (also spelled Khoja Akhrar, Khoja Ahrar, Hoja Ahror, Xoja Ahror, Haji Ahrar). It was kept in a Samarkand mosque for about four centuries till 1869 when Russian Turkestan Governor General Konstantin von Kaufman sent it to the Imperial Library in St. Petersburg. Vladimir Lenin gave it to the Muslims of Ufa, Bashkortostan, Russia, after the October Revolution, and then, in 1924, the codex returned to Uzbekistan, where it has been kept in Tashkent ever since.

The complex also contains the building of the Al-Bukhari Islamic University (built in 2007 too) and the offices of the newspaper Islom Nuri (‘Ray of Islam’) and the magazine Hidoyat (‘genuine way’) under the Muslim Board of Uzbekistan.

The buildings of the complex look very impressive from a distance, too, particularly at night when they are fabulously illuminated. The complex grounds are also beautifully laid out, featuring neat lawns, flowers, tree lines, as well as storks walking around in spring, summer and autumn, which makes the site even more attractive place to visit. 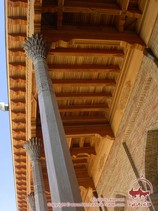 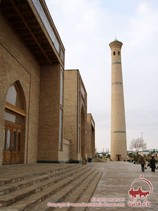 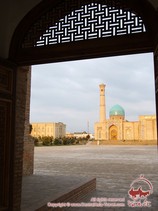 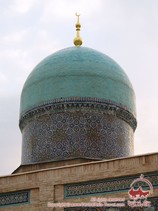