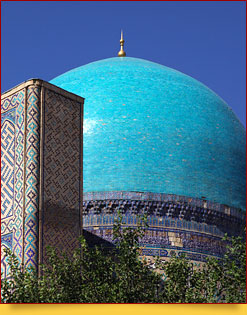 The mosque Kok-Gumbaz (‘blue dome’) was built in 1435 on the foundations of an earlier structure in the architectural complex Dorut-Tillavat, with the front of it facing Shamseddin Kulyal Mausoleum. Kok-Gumbaz Mosque is the largest Friday mosque in the city. It was where all the major religious ceremonies were held. The construction of the mosque was initiated by the great Tamerlane’s grandson Mirzo Ulugbek, the world-famous astronomer and statesman. The main entrance portal of the mosque still has an inscription saying that Ulugbek built Kok-Gumbaz on behalf of his father Shakhrukh.

It is interesting that while designing the building, its architects tried to align its height with Kulyal Mausoleum’s. They built the mosque to be symmetrical with the mausoleum, which gave the complex perfect harmony. They even had to break the Islamic law for the sake of this, turning it a little away from the holy Mecca direction.

The sphero-conical dome is covered with azure tiles to symbolize the cloudless sky over the vast domains of the ruler. It looks like an air balloon from a distance, creating the illusion of lightness and flight. Around the basal part of the dome runs a light stripe with excerpts from the Koran surahs. Inscribed in beautiful calligraphic script characteristic of the times of the Timurids there are a lot of wise and well-known maxims. The largest and brightest of them says, ‘Power and wealth belong to Allah. Only Allah possesses lordship’.

On entering the building, you see it is square, so the span and size of the dome seem to be even larger. Grand and robust, it is high over your head and yet seems to embrace you from above. The diameter of the dome is 46 meters. Voices and other sounds in the mosque transform into a peculiar and deep echo. There are four spiral stairs in the corners, leading to the upper floor rooms and the roof. The interior walls are covered with gunch stucco with fine individual ornaments in blue. There are also niches in the walls located as to the cardinal points.