The Palace of Ak-Saray

The Residence of Tamerlane in Shakhrisabz 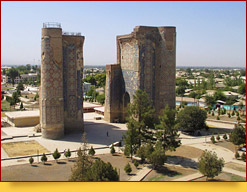 Ak-Saray Palace is one of the most magnificent monuments of the Timurids of the XIV - XV centuries, erected in the city of Kesh (Shakhrisabz). Amir Timur (Tamerlan, Tamerlane) directed the construction himself. After Timur had already built a great number of palaces and fortresses in the capital of his land, in Samarkand, he wanted to beautify his home town Shakhrisabz with a palace, which has not been seen in all his empire yet. He called the most skilled architects and craftsmen from all over his possessions. Also, about 50,000 slaves took part in this large-scale construction. Ak-Saray Palace was planned as the most grandiose of all Timur's constructions.

In translation from Uzbek “Ak-Saray” means “white, light, magnificent palace”, this symbolizes the cloudless future of the people and the greatness of Sakhibkiran. As historical sources say, "White Palace" was being built during the period from 1380 to 1404.The construction was completed a few months before the death of the autocrat.

Ak-Saray Palace is a complex consisting of a large number of buildings: luxurious rooms for receiving guests, inns for famous travelers, multi-storey terraced gardens with pools and fountains for king and his  numerous noblemen’s relaxation. Having been 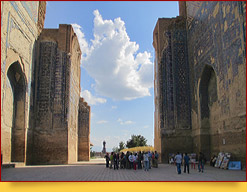 paved with slabs of white marble, courtyards of Ak-Saray reflected its name. Each door was decorated with golden blue and carved patterns. Facades of buildings were covered with colored tiles. The perimeter of the whole complex was walled with battle towers and patrol units. You can truly appreciate the scale of the whole building only by watching its size. According to the researches of modern archaeologists and scientists, as well as according to the written records of that time only the internal front yard covered an area of ​​over 30,000 square meters with total width of 120 m and length of 250 m, the height of the main portal the central part of the castle reached 70 m. Corner towers of the multifaceted complex reached dizzying height of 80 m, like biting into the sky with their arched pinnacles (‘ko'ngra’).The main portal was so big that the width of its entrance could be compared to the width of a football pitch. And the arch was the largest of its kind in all Central Asia - its span was more than 20 meters!

Masters from different parts of Asia worked at the palace, and brought culture and art motifs of different nations. Ethnic mix of Tabriz, Iranian and Indian elements in the performance of the palace are harmoniously neighboring with the eloquently standing out Timurid- 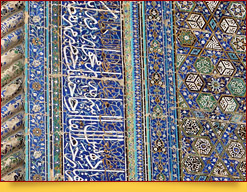 style. All together they create a unique pictorial image of Ak-Saray.

The main portal of the palace was faced to the north, to the capital of Amir Timur’s state, Samarkand.

Mosaic of dark-blue and light-blue tint was put on pre-polished building brick, forming a complex geometric system of patterns and drawings. Special attention should be paid to the painted walls in a niche of the portal. Diverging to the sides, they form typical for those times floral pattern. Jewelry fitted together, ornaments present particular grace, because inside each turn there was a skillfully performed calligraphic inscription. Like huge tables, these walls reflect the whole experience of previous generations and wisdom of past philosophers. There were a large number of sayings of the Koran and runes, telling stories of national epics and folk fables here.

Nowadays, only two survived pylons remind of past greatness of the Timurid’s era. Where it was possible, there was carried out restoration work at all parts of the palace.

Now the palace complex of Ak-Saray is a World Heritage Site of UNESCO.