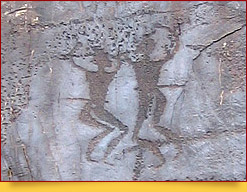 Petroglyphs and pictographs made by early man survive in many parts of the world. Sarmish-Say Gorge is one за them; it boasts a large collection of rock art items, which makes it one of the most important attractions of Uzbekistan and a prehistoric picture gallery of global significance.
Sarmish-Say Gorge is located at a distance of 30 kilometers northeast of the city of Navoi, on the southern slopes of the Karatau Mountain Range. Nature seems to have created the gorge to serve as a huge canvas for early artists.

There are over 4,000 petroglyphs and pictographs scattered along the gorge over a distance of two kilometers. Most of the them are approximately 6,000 - 4,000 years old; the oldest of them are over 10,000 years old. Some of them are rock engravings; some were made with ochre-based paints. The pictures cover subjects as diverse as hunting scenes and rituals, or they are just depictions of humans and animals. Some of them appear strange: for instance, fantastic animals, signs or even humans with two heads, dressed in something like spacesuits, though they are rather ritual masks and costumes. It is hard to say now which of the pictures were reflections of real objects or fruit of artistic imagination.

The surroundings have not changed much since the images were made, and it seems you find yourself in the age of prehistoric artists. Smell of fried meat and sounds of shamanic tambourine seem to become real immediately. 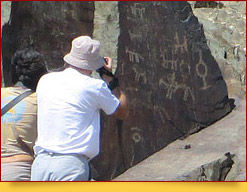 It is the place where you forget the Internet, motor vehicles, electricity, etc. Once you are in the gorge, you instinctively walk slower…

Besides the rock art, the gorge has a dwelling cave of early humans. It is quite large and has a few halls connected with passages. It is the place where many generations of Sarmysh-Say prehistoric artists found shelter and protection from bad weather and wild animals. There are a lot of legends about Sarmysh-Say Gorge, just like about many sites similar to it. Most of them deal with ‘people descending from the sky’. The locals say that they have seen mysterious objects flying in the sky over the gorge.

Sarmysh-Say is not just an important tourist destination in Uzbekistan. It is also a pilgrimage place of many scholars. The it is not the number of petroglyphs and pictographs in the gorge that makes them so attractive; they are unique owing to the fact that they are not copied or repeated elsewhere. They can still tell a lot about early humans’ life, beliefs, customs, etc. Sarmish-Say Gorge is a sort of prehistoric picture gallery and a rich archive of information on a period in the past we know so little about.