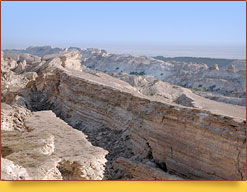 Ustyurt Plateau is the most mysterious and least researched destination in Uzbekistan. In some records the plateau is called ‘an island’, and it is clear why: within the mass of desert sand chink plateau edge cliffs of over 300 meters in height are rising. The cliffs are so steep that there is only a place or two within the length of over 100 kilometers where a human can go up to the top of them.
The very sight of a steeply rising wall in the desert makes you feel awe for it. Besides, these cliffs have very impressive colors: from pure white to blue and pink, looking like a wonderland walls. Once you have got up, you see it still looks surreal. There are no bright green pastures up there, though. What you see looks like the surface of an uninhabited planet from a space opera. The terrain is rocks, cracks and caverns.
Although the area of the plateau is 200,000 square kilometers, there are no rivers or lakes. Even the water obtained from the wells there is somewhat bitter and salty there. The flora is, therefore, quite scarce; the whole plateau is covered with poor wormwood or saltwort. However, people have not always avoided the plateau. They discovered over 60 settlement sites of the Neolithic Age. There are archeological evidence of the Scythians and Mongols staying in Ustyurt. A large number of caravan trade routes connecting Asia and Europe ran through the plateau. Only a small number of architectural monuments dating back to the times of classical antiquity survive there: the ruins of a lone arch of Beliuli Caravanserai; 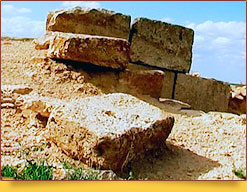 the ruins of Alan-Kala Fortress, whose walls were four meters in height and 2 meters in width; and a few others.

No archeological excavations and researches were for a long time conducted in the plateau because of its hard-to-cross terrain, remoteness and climate. However, during the archeological expedition in the Western Ustyurt in 1983 they discovered ancient cult structures called Bayte Cult Complexes. They consisted of large burial mounds, sacrifice tables and stone sculptures of men in fighting outfit. The examination of the finds proved that they belonged to the Dahae-Massageteans of the second half of the 4th - 3rd centuries BCE. Such complexes in Asian plains had never been discovered earlier. They had not been typical of nomadic tribes of those times, so the purpose of them remains unknown. Yet the most intriguing Ustyurt sight is the mysterious designs discovered by academic scholars during a helicopter flight over the plateau in 1986. Called ‘arrows’, they fill the area between the villages Beyneu and Say-Utyos. Similar designs were found only in the Nazca Desert, Peru. All the arrows are built from stones, and they point northward; each of them is 800 - 900 meters in length, 400 - 600 meters in width and up to 80 centimeters in height. The purpose of these structures, just like the purpose of the Nazca designs, is still unknown. There were a lot of various hypotheses, though: irrigation, cattle enclosures, mystical purposes related to Bayte Complexes… Whichever is closer to the truth, strange events often take place in Ustyurt Plateau. The locals tell about mysterious lights in the sky, very clear day and night mirages, etc. Sometimes the visitors of the plateau notice something like these by themselves; some people even go to Ustyurt Plateau especially for this experience. Whatever the aim of the visit, the natural grandeur of the plateau and its unique landscapes alone are certainly worth seeing.