Near Samarkand there is an operating paper mill, where craftsmen make by hand famous Samarkand paper on ancient technologies.

For many centuries Samarkand has been famous for its artisans. Samarkand survived countless number of invasions that brought not only grief and devastation. Quite often, they were one of the most effective ways of cultural and technological exchange. In 751, when Chinese troops invaded the territory of Central Asia, the glory of Samarkand papermakers was born and began its victorious march. The ruler of Samarkand, Abu Muslim, won a battle against the foreigners, and captured more than twenty thousand Chinese. Among the prisoners there were many representatives of artisans who had to reveal their secrets to the enemy. That was the beginning of manufacturing writing paper in Samarkand.

Already in the IX century, the production of paper became one of the most important directions of handicraft in the region. But Samarkand masters not only continued production of paper, copying China technology, but also made a lot of changes both in the production process and in the components of the raw material, constantly improving product quality. The main types developed by them were: “Samarkand shoyikogozi” - light yellow, the finest and smooth paper; “Samarkand Sultonkogozi”, reminding “Samarkand shoyikogozi”, but it had a white color; “Nimkanop” - paper of brown color and “Mir-Ibrahimi” with watermarks in the form of a ring.

Having existed until the middle of the XIX century, Samarkand papermaking gained wide popularity both in Arab countries and in Europe. With its unique smoothness, Samarkand paper was very comfortable for writing, and good density did not allow absorbing a lot of ink, that was a very important quality characteristic of the paper at that time. 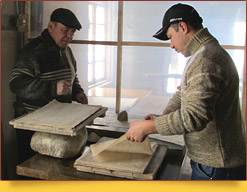 Moreover, some types of Samarkand paper were more comfortable for reading, thanks to the fact that the brownish tint of paper softened the contrast with ink.

Paper was made of cotton, silk and bark of the mulberry tree. The bark of mulberry tree was the main secret of Samarkand paper and made it an important export product and historical site of ancient Samarkand. Growing practically throughout all territory, a mulberry tree provided paper with silkiness and light brown tint.

Unfortunately, paper production in Samarkand was killed as well as it appeared - because of the war. To be exact, because of the internecine wars between Bukhara and Samarkand, that caused the weakening of the region, with following invasion of djungars who brought devastation. Many secrets of the paper production were lost at that time, but thanks to the efforts of the modern masters ancient paper manufacturing was fully restored in the second half of the XX century. Ten kilometers from the center of the modern Samarkand there was opened a workshop of paper manufacturing, and it uses the same technology and raw materials as thousand years ago.

Here is how the ancient Samarkand masters did:
From the onset of the first frost master cuts thin twigs of the mulberry tree, removes the upper layer of bark and separates a soft porous layer of cambium, then which is dried and boiled forming a pulp. After crushing with wooden sticks, the pulp is placed into the water, filtered and dried in a form of sheets in the sun.

Then mukrakash (master polisher) puts the sheets on a marble slab and carefully polishing them with sea shell, seeking that smoothness and silkiness that glorified Samarkand masters of papermaking.