In the south of the ancient settlement Afrasiab, on a natural terrace-shaped elevation, to which a steep staircase leads, the Hazrat Hizr mosque (Hazret-Khizr, Hazrat-Khizra) was built in the XIX century. It is not the oldest structure in Samarkand, however, it has a long and very interesting story. The mosque was built on ancient foundations, and historical written sources (and later archaeologists confirmed this) say that in the XI century the very first mosque in Samarkand was erected here: “on the place where Muslim banners were located”. 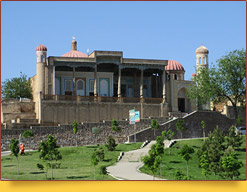 Since time immemorial, there have been city gates near this hill, and close to them the Argiz aqueduct ran, which supplied the inhabitants of Samarkand with water. Argiz was believed to be filled with living water. According to legend, Kussam ibn Abbas, a cousin of the Prophet Muhammad, hid from people here.  In the pre-Islamic era, people came here, to the place where the Hazrat Hizr mosque was later erected, to worship the holy elder Hizr, the patron saint of wanderers, who fulfilled the wishes of the worthy and sent them  crops and fertility. Over the course of several thousand years, the legend of immortality that a living being could achieve has been passed down from generation to generation. The image of Hizr created by the ancient Persians  over time spreads throughout the Muslim world. Hizr is an analogue of the Sumerian Gilgamesh, who had found the source of immortality, but failed to become imperishable himself; the immortal heroes of Ancient Greece and the ever-living Highlanders of the Scottish MacLeod clan, about whom a popular movie in Hollywood was filmed.

The Hazrat Hizr mosque itself  was built in 1823. According to historical documents, it was part of a single complex with the mazar of Kussam ibn Abbas. The mosque has a rather high base with arched niches of iwan. The covered canopy on the pillars, richly decorated with ornaments, leads into a square khanaka. It has a mihrab niche facing to Mecca in the middle and two hudjra cells on the sides. The khanaka panel is divided by rectangular frames. From the east, the portal of Darvazakhana with guldastas and beautiful carved gates is organically included in the architectural complex of the mosque. This row is closed by a separate eastern minaret. The walls of the mosque are decorated with polychrome ganch carvings, and the dome is decorated with openwork carvings using the chaspak technique. On the walls of the mosque there are many dates indicating the time of restoration of the building which mainly refer to the XIX-XX centuries.

Above the mihrab of khanaka there is an inscription indicating the date of the main reconstruction: the earliest repair was carried out in 1271 hijrah (1854). Below there is a date, which indicates the time of decoration of the khanaka: 1302 year of hijrah (1884). In 1889, the building of Darvazakhana was constructed as an annex to the entrance from the east side, the reconstruction of the iwan dates back to the same time. The date at the entrance gate - 1338 Hijra (1919)   indicates when the eastern minaret was erected. Above the staircase of this minaret there is an inscription that says “usto Abdukadir, son of Baki Samarkandi”  written in honour of the constructor of the building, under whose leadership usto Fathullah worked on wood, and usto Mahmud worked on the painting.

The legend of St. Hizr. 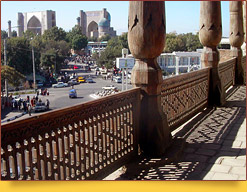 In addition to the fact that one of the oldest mosques in Samarkand is named after Hizr, he is a hero of several local beliefs. Many people still dream of meeting him, sincerely believing that St. Hizr will bring them good luck. So what the “green light” that envelops Hazrat Khizra is, taking into account that the name of the saint means that in Arabic?

Hizr is often mentioned in the legends about Alexander the Great, whose name until now, after more than two thousand years, remains popular in the East. So, there is a legend: during the passage through the Pamir, Macedon had learned from local residents that high in the mountains of Yazgulem there was a source of water that gave immortality. Desiring to taste that wonderful drink, Alexander sent to the source his best warrior named Hizr. The powers of heaven were kind to Hizr: the source was revealed to him. Hizr quenched his thirst, having drunk from a magical spring, and filled alabaster for his master with the miraculous water. But Alexander was not destined to taste the wonderful water, on the way back the vessel had been broken.

In the famous Persian epos of the poet Firdousi "Shahnameh" ("The Book of the Kings", the end of X - beginning of XI century) a similar story was described. The legends differ only in details: at Firdousi, the action takes place in the west from the border of the inhabited world in the place where the Amazons lived (although it is possible that the action takes place in the Pamir mountains); Hizr, in “The Book of Kings”, is a wise and revered local ruler, and Alexander asks him for help in finding a source located behind an invisible mountain lake, whose waters, "like an abyss", absorb sunlight.

The image of Hizr, deeply respected in the Muslim world, has acquired special features in many places. He is compared with the prophet Elijah (Kamal-Ud-Din Abul Ganaim in "Sufi terminology"), and with St. George (At-Tabari in the Chronicle of the Prophets and Kings).

Hizr is considered the patron saint of travellers: according to legend, he travels around the world with an unknown mission given to him by Allah. The Muslim clergy faithfully believes that in the 18th Sura of the Quran “Al Kahf” (“Cave”), when the prophet Musa (Moses) meets at the “place of the confluence of the two seas” the God's Servant, who taught Musa a lesson on the global meaning of phenomena, the Sura talks about Hizr, although there is no mention of him in the Quran. 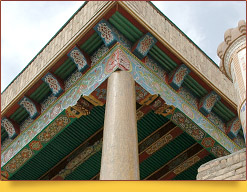 Eugene Bertels, the famous Soviet orientalist, wrote about Hizr thus: “The origin of this image has failed to be clarified so far. Although it is undoubtedly that he comes from some ancient deity of the plant world, under whose feet everything turns green and blooms, but there are many other features superimposed on this idea..."

Another authoritative orientalist - academician Vasily Bartold - noted that the legends of Hizr are closely connected with the Sufis. Talking about Hizr, Sufis note that sometimes stories about him are entirely fictitious, because you may not talk about Hizr. It is known that he appears only when there is a necessity in him. Hizr can appear before any person, but what benefit a person will get from this meeting depends only on the purity of his intentions.

In the view of the common people, Hizr is a very wise and at the same time cheerful old man who brings good luck, happiness and peace of mind. Believers who dream of seeing Hizr pay special attention to the hands of travelers they meet: according to legend, Khazrat Hizr lacks a phalanx of the thumb. They say that Hizr can be met three times in life, and he can come in any guise. Therefore, in the East, where it is already customary to show special respect and attention to guests, it is believed that hospitality cannot be selective.