Jami Mosque And Madrasah In Kokand 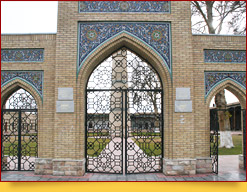 The Jami architectural complex (late 18th-early 19th century) consisting of a madrasah and a functioning mosque is located in the Chorsu Square in Kokand (Fergana Valley, Uzbekistan).

The construction of the complex was initiated by Alimkhan, the ruler of Kokand. For that purpose an experienced master was invited from Ura-Tyube to supervise the work. A team of 200 talented builders were engaged in the construction.

The mosque’s reputation as a very beautiful edifice soon reached the borders of the Khanate of Kokand and went far beyond them.

The western part of the court is occupied by a huge iwan supported by a hundred wooden columns. Made of a local variety of elm with strong and hard wood, they strike one’s imagination with a widest range of ornamental patterns and colours tinged with golden azure. The columns rest on square marble bases. According to some sources, they were brought to Kokand from India, at that time the country of residence for poetess Zebinisso, Babur’s great granddaughter, who sent these columns to local khans as a gift.

Other ten identical decorative columns could be found in the interior of a khanaka (also spelled khanqah, khaniqah, khanqa, khaneqa, khanegah or khaneqah) – a room where prayers were organised in the winter season. The khanaka in the Jami cathedral complex is famous for its high decorative ceiling.

The main façade of the mosque about 100 m long is oriented to the east. All the walls have panels ornamented in the traditional style with mosaics of coloured pieces of ganch.

During the reign of Khudayar Khan, a prominent Kokand ruler, a minaret 22 m high was built of baked bricks on the site. A staircase spirals inside the minaret. The structure was used to call all Muslims in the city for a prayer. Its other function was to execute criminals, unfaithful wives and traitors by throwing them from its top.

In 1905 the complex was renovated.

Nowadays, the Jami Mosque is the main Friday mosque of Kokand. As it was centuries ago, the citizens can be seen hurrying to the mosque for their Friday prayer.