The Avesta Museum is situated in Khiva, in one of its numerous madrasahs. According to some scientists, Avesta, the sacred book of Zoroastrianism, originated in Ancient Khorezm (also spelled Khwarezmia, Khwarizm, Khwarazm, Khwarezm, Khoresm, Khorasam, Harezm, Horezm, and Chorezm), which was the reason why the Avesta Museum was organised in Khiva, the capital of this ancient state. Khiva is mentioned in the Zoroastrian sacred book under the names of ‘Urva’ and ‘Urga’. 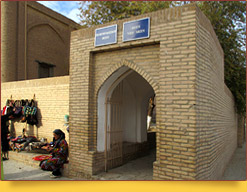 Zoroastrianism (Mazdaism, Zoroastrism) is one of the first religions in the history of the mankind. Although its place of birth has not been ascertained, scientists have found a lot of evidence allowing them to make a suggestion that the religion appeared in Ancient Khorezm.

According to Avesta, the prophet and the founder of the religion of Zoroastrianism, as well as the author of the sacred book, was Zoroaster (also spelled Zarathushtra, Zarathustra). As Avesta was being written for several centuries, influenced by various cultures, dialects and languages, the prophet Zoroaster is mentioned under different names in it (Zaotara, Ataurvan). The principal god of wisdom and everything good was Ahura Mazda (also spelled Auramazda, Ormizd, Ormazd), who communicated his knowledge to Zoroaster.

Avesta is not only a collection of Zoroastrian holy texts and a monument of the Old Iranian language and philosophy, but also a unique document describing the history of the first states in the territory of Central Asia and the social and economic relations between the people of the region. Avesta told that the first of the best places and countries created by Ahura Mazda was Aryanem Vaychakh (Arian spaces), the second of the best places was Guvu (Sogd), the home of the Sogdians, the third was Mauru (Merv) and the fourth place was Bahdi (Bactria). 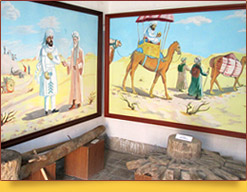 According to the majority of scientists, Zoroaster lived in the 1st millennium BC. Avesta’s first texts had only an oral form, but in the 7th-6th centuries BC they were collected and written in Ancient Persia. The writings were made on bullock skin with the use of golden ink. All those texts written on 20,000 pieces of bullock skin were burnt up by Alexander the Great. At a later time Zoroaster’s teaching was restored and re-written. Today Avesta is considered to consist of 21 books, 5 of which have a written form and 16 are oral, communicated from generation to generation.
Avesta tells about the life of communities (farmers and cattle-breeders) ruled by patriarchal relations, about the class differentiation and about divinities and spirits, which produces a rather clear image of the people of that time.

Avesta is also a collection of laws demonstrating that the class differentiation and the sense of justice were not alien to the people in the first states. For instance, beating of slaves was forbidden; in case of violation of this law the slave could appeal to a court. This testifies to the existence of a social structure consisting of slaves, their masters and a court above, which was to protect everyone regardless of their social class. Children were also under the protection of the state. They had to live with their parents and receive an education since early years. Persons involved in children abduction and those refusing to take care of their children were severely punished.

The struggle of the good with the evil was the basic principle of Zoroastrianism. In his teaching Zoroaster called upon people to love and help each other and to unite at moments of disaster. The dog, a friend guarding one’s home and cattle, had to be treated with care and love. On the contrary, killing a wolf, a symbol of the evil, was regarded a noble deed. 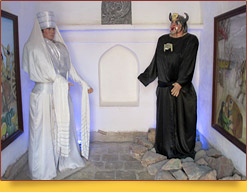 The earth, fire, water and air were sacred elements. That was why the dead were not buried or burnt, but were brought onto a special hill, dahma, where their flesh was eaten up by predators. After that the bones were put into special containers, ossuaries. Risto-kasha, people, whose job was to carry dead bodies, were cursed to the end of their days and were forbidden from contacting fire or water and from approaching too close to other people.

Avesta also mentions the architecture of that period and the building material used in construction (mud brick and pakhsa blocks).

No doubt, Zoroastrianism influenced all the four world religions - Islam, Buddhism, Christianity and Judaism (with candles as an inherent attribute and god assuming the form of fire to descend onto the earth in Judaism and Christianity). One of the most important holidays mentioned in Avesta was Navruz (Nowruz, Novruz), which is to this day celebrated as a major official holiday in a number of Asian countries.

Avesta’s postulates calling to good deeds are as usable today as they were thousands of years ago. A monument to Avesta, an image of a large white-leaved book in the flame of red stone over a marquee was erected in Urgench (Urgenc). Avesta is being largely studied in Uzbekistan and throughout the world. In 2001 UNESCO organised a celebration of Avesta’s 2,700th anniversary.