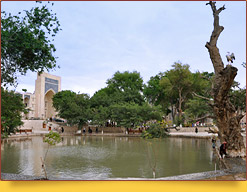 Lyab-i Hauz Ensemble (also spelled Lyab-i Khauz, Lyabi Hauz, Lyabi Khauz) is probably the most popular Bukhara tourist attraction, often used as a rest stop, thanks to its grandness, tranquility and old age. Lyab-i Hauz is located in the southeast shakhristan (the part of the city within the city walls but outside the citadel) near the main Bukhara trade street.

Built in the 16th - 17th centuries, Lyab-i Hauz Ensemble is still one of the major Bukhara squares. It has a large artificial pond (42 meters in length, 36 meters in width and 5 meters in depth) with Nadir Divan-Beghi Madrasah, Nadir Divan-Beghi Khanaka, both built in 1622 (khanaka - also spelled khanqah, khaniqah, khanqa, khaneqa, khanegah or khaneqah - is a Sufi hospice and monastery), and Kukeldash Madrasah built in 1568 on the three sides of it. Lyab-i Hauz means ‘by a pond’. Bukhara once had a lot of hauz ponds; they were the main city’s source of water. In the early Soviet era most of them were dried, since they were also a source of many diseases. Lyab-i Hauz pond, however, was one of the ponds left to stay on. 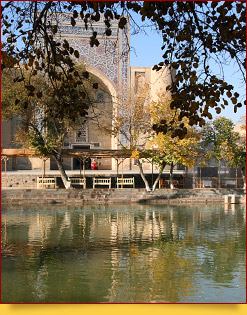 The ensemble was constructed thanks to the vizier Nadir Divan-Beghi. He ordered to build the pond before his madrasah, khanaka and Kukeldash Madrasah to complete the artistic idea of the complex. According to Dmitriy Page, the author of a Bukhara guidebook, the construction was preceded by the following incident.

The site Nadir Divan-Beghi wanted to build the pond at was occupied by a house owned by a Jewish widow (there were a lot of Bukharan Jews in the city). The vizier asked the widow to sell it for a good price but she rejected the offer. Then the vizier took her to the emir Imam Quli-Khan. The emir was a wise ruler and forwarded the case to the panel of muftis, Islamic lawyers. According to their resolution, the vizier could not take the widow’s house by force. They believed the local Jews and Muslims had to enjoy equal rights. Then Nadir Divan-Beghi hatched a plot to gain what he wanted: he built a canal at the side of the widow’s house and its water began to slowly undermine one of the walls. The widow went to the vizier to appeal to his conscience but the sly man just repeated his wish to buy the house. Then the widow said she would not take money for it; in return she wanted a piece of land and permission to build a synagogue on it. Nadir Divan-Beghi accepted it willingly and gave the woman his land in the neighborhood that is now called Jewish. Soon they built the pond - and the first Bukhara synagogue. According to some Bukhara historical sources the pond had the unofficial name Hauz-i Bazur, which means ‘built through compulsion’.

In the Middle Ages Lyab-i Hauz, with the main trade street nearby, was used as a trade square because it had a lot of open space while the rest of the city was built up densely. 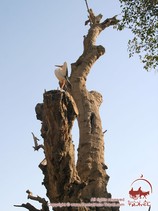 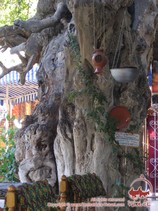 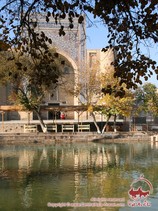