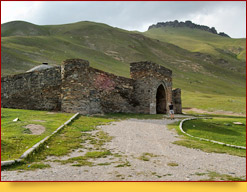 The Tash-Rabat caravanserai is a unique architectural monument of the early Middle Ages, dating the 15th century more precisely, a symbol of the Tenir-Too mountain architecture and one of the main archaeological sites of Kyrgyzstan. It is located at 3200 meters in the picturesque Kara-Koyun canyon (Naryn region), 110 km south of the city of Naryn, close to the Chinese border.

In those distant times, when busy trade caravans were still going along the roads of the Great Silk Road, the Tash-Rabat fortress served as a caravanserai on one of them, that is, in the modern sense, was a medieval inn for merchants and travelers - one of the unusual stone structures located in the valley of the small Tash-Rabat river, in the Central Tien Shan. The caravanserai stood on the trade route, which connected the Chui and Fergana valleys with Kashgar.

Kyrgyz pastoralists and hunters considered this stone building to be a very unusual and associated their legends with it.

In the late 19th and early 20th centuries, scientists were closely involved in the study of Tash-Rabat. They disputed the timing of the monument’s construction, determined the purpose and cultural identity of this complex differently. Some researchers considered Tash-Rabat a caravanserai of the late Middle Ages, others tended to believe that this structure represents the ruins of a 10th - 11th centuries Christian Nestorian monastery. 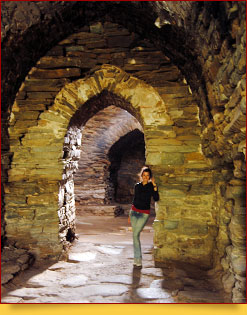 In the 1980s, Ministry of Culture of Kyrgyzstan restored valuable monument of the republic’s historical and cultural heritage. Once the restoration was over, the site opened for visitors from different countries.

Description
The restored and renovated Tash-Rabat is an almost square building with sides of 35.7 m and 33.7 m, resembling a medieval castle, entirely covered by a solid horizontal roof with a spherical dome in the western part. The main facade of the building is located on the east side. It is a high, powerful stone wall with corner towers and a gate with a high portal and an arch. On the outer side, along the east wall, there is a wide ledge - a sufa and an entrance gate paved with stone slabs. Three other walls have no doors or windows. The building is built thoroughly into the mountainside under which it was constructed. Its western wall rises over a meter above the mountain slope surface. The side walls, going down the slope of the mountain terrace, connect the low western one with the high eastern front wall.

All rooms inside the external walls are covered with a common roof with a spherical dome. Inside the building, a central corridor runs from the gate in the eastern wall center to the western wall. It rests on a square room, over which the dome rises.

On both sides of the corridor and the hall there are various rooms: long rectangular and small square. Some have ledges along the walls. The side rooms floor is lower than in the central corridor. At present, one of the side rooms hosts a rather large inclined millstone with a square through hole in the center. Fragments of stylized vegetative ornamentation are preserved on the surface of the inner side of the dome. Due to the lack of windows even during the day, most of the rooms are rather dark. Small openings are around the perimeter of the dome and in the building’s ceiling let some sunlight within. 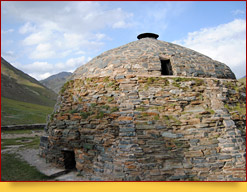 A burial ground surrounds the building and runs along the mountain ridge’s slope. Stone displays, sole stone slabs and earth mounds are noticeable. Some graves bear traces of recent excavations. Apparently, the local community continued to bury the dead after the building ceased to function. There is evidence that Dungans who had migrated to the Russian Empire from Kashgar at the end of the 19th century buried their tribesmen in this cemetery.

Although the appearance of Tash-Rabat testifies it was built in the traditions of medieval Central Asian architecture, the unusual nuances of its construction caused the researchers to address the purpose of this structure differently. Most of them believed that it served as a caravanserai, since the building is located in a gorge, along which a mountain path leads from At-Bashi to Kashgar, perfect for trade caravans, and the layout of the walls with towers and portal gates is typical of many medieval Central Asian caravanserai. Under the fortress there are still many underground passages, all sorts of secret exits and prisons (zindans). They have been used for centuries as shelters for refugees and hermits, places to study religion. However, this building does not have a courtyard, where caravan drivers usually unloaded and placed pack animals. Therefore, some scholars considered Tash-Rabat not a caravanserai, but not a monastery, built in a remote mountain canyon far from the adherents of a different faith. However, no artefacts of the Christian cult, testifying in favor of such an assumption, were found in the excavations. The cemetery around Tash-Rabat has no graves with Nestorian tombstones, similar to those preserved in medieval Christian burial grounds in the Chui valley. Probably, in order to resolve such a controversial question, it is necessary to continue the studying this interesting monument. 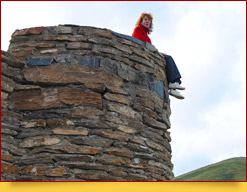 The history of the building is a bit controversial. If you believe the documents, it was constructed on the orders of the local ruler Mohammed Khan. However, old people tell this legend: “Tash-Rabat was built by father and son. Nearly at the end of construction, when it was only last stone left to put on the dome, they saw an approaching caravan. The son left his job and decided to see what kind of people were going there. “Wait,” said the father, “let's finish the work first.” However, the son did not obey, left and did not return. As it turned out, a young beautiful girl was driving the caravan.  So Tash-Rabat remained standing without a roof ...”.

As you already understood, this architectural monument is the largest stone building of Central Asian architecture. Lost among the pristine nature, far from populated areas, Tash-Rabat looks stern, monumental and unapproachable. Nevertheless, the fortress continues to attract tourists’ attention. In addition, from here you can make a fascinating equestrian route through the pass to the alpine lake Chatyr-Kul. Our company is glad to help you with this.