Burana minaret near the town of Tokmak in Kyrgyzstan 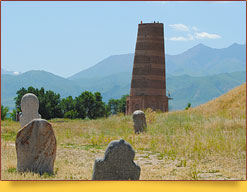 The Burana Tower (or Burana Minaret) is an archaeological and architectural monument located among the ruins of the Burana settlement, 12 km south-west of the town of Tokmak in Kyrgyzstan, on the left bank of the Chu River.

Historians believe that it is all what was left of the medieval city of Balasagun, the capital of one of the largest and most powerful Turkic feudal, the Karakhanid state (940-1212). At this time, Balasagun, located on the Great Silk Route, was one of the booming Central Asian cities. In 1219, the Mongols captured the city, and it completely slipped out of existence by the XIV century. The huge Burana tower, ruins of fortresses and defensive walls, as well as fragments of water pipes and household items and products of decorative art found here are the only witnesses of the Karakhanids capital past greatness.

The Burana Tower (X-XI centuries), built of burnt brick, is an outstanding ancient structure, part of the archaeological and architectural Kyrgyz Museum and a monument of cultural heritage. 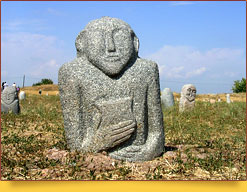 Its height today is 21.7 m, but initially the tower was at least 40 m, and an earthquake some time ago destroyed its upper part. Nevertheless, our vivid imagination can finish the missing meters and go back it time. The Burana minaret has a foundation, a podium, a base and a trunk. The foundation is of clay mortar with stone (instead of concrete) and marble cladding. The octahedral base with arched niches of burnt brick is sort of “dressed” on the podium. Above, the trunk of a minaret narrows upwards to the sky, like a giant tree. There is a spiral staircase with inconvenient battered brick steps inside the tower. Inconvenient, because either we are much taller than our ancestors were, and our step is longer, or the size of our feet is gigantic compared to the contemporaries of the Karakhanids.

The Burana Tower is covered with original legends that are often sad. One of them tells about khan, who had a beautiful daughter. The daughter was predicted to be killed by the bite of a black spider, so the khan ordered to build a tower, put the daughter in the room at the very top of it and carefully search every visitor. However, on the day of her 16th birthday, as predicted, the girl died from the bite of a spider, which the khan himself accidentally brought in bunches of grapes. Burning with anger and grief, Khan hit the wall and demolished the top of the tower, so now the minaret is shorter by a couple of tens of meters.

Today, the Burana Tower is one of the largest Kyrgyzstan historical and architectural monuments and is protected by the state, and attracts both scientists and tourists.