Baykonur is the name for a town and a launching site, at which the communication between the earthlings and the mysterious and unexplored space began. This is the place where Yuri Gagarin, the world’s first cosmonaut, began his journey into the enormous space. 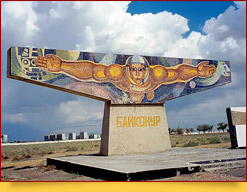 ‘Baykonur’ (‘baykonyr’) is a Kazakh word meaning ‘fertile land.’ The Baykonur cosmodrome is the world’s first and largest launching site, its area being 6,717 km².

The Baykonur cosmodrome became the site where the artificial satellite (sputnik) was for the first time launched and the man for the first time flew into space. Manned spacecrafts ‘Vostok’, ‘Voskhod’ and ‘Soyuz’, orbital stations ‘Salyut’ and ‘Mir’, space shuttle ‘Energiya’ - ‘Buran’ and various interplanetary spacecrafts and artificial satellites were launched from Baikonur. Around 1,500 spacecraft and satellites of various types have been placed in different orbits. 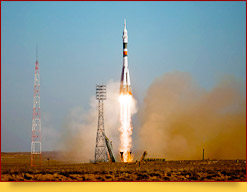 The first rocket that was tested at Baykonur Launch Complex was intercontinental ballistic missile P-7 designed by S. P. Korolev. On 4 October 1957 the first artificial Earth satellite was put in orbit with the help of missile P-7. On 12 April 1961 Yuri Gagarin operated the first manned spacecraft Vostok, which had been launched from the Baykonur Cosmodrome.

Currently, Baykonur is the most loaded of the launching sites around the world. Baykonur launches most of heavy lift launch vehicles, such as Proton K and Proton M, and spacecraft Soyuz, with a large portion of manned spacecraft.

The population of Baykonur is around 60 thousand people, a large portion of which are engaged in various cosmodrome’s departments. The climate features much sun and little precipitation, with occasional strong winds.

The history of Baykonur begins since 1955, when the Soviet Government made a decision to create the Scientific Research Testing Area for spacecraft. The launching site’s official date of birth is 2 June 1955.

As the USSR disintegrated, the site’s launching activity dropped considerably, the people were gradually leaving the town, and the town began to degrade. The status of the launching site also became uncertain: it suddenly found itself in the territory of independent Kazakhstan, while the launching operations had always been performed by Russia. Finally, in 1994 Russia and Kazakhstan signed an agreement, following which Russia acquired the right to use the cosmodrome in exchange of an annual payment. In December 1995 the town of Leninsk was renamed into Baykonur.

Today the town of Baykonur features a well developed infrastructure: an airport, a railway station, roads, schools, departments of higher education institutions, cafes, restaurants, a hospital and a sports complex. 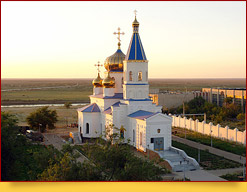 The town of Baykonur features a large number of monuments erected in honour of outstanding scientists and space researchers: a monument to Academician S. P. Korolev, a statue of M. K. Yangel, an eminent spacecraft designer, those of V. P. Barmin, Academicians V. P. Glushko, V. I. Kuznetsov, N. A. Pilyugin and M. S. Ryazansky, Artillery Chief Marshal M. I. Nedelin, Colonel General A. A. Maksimov, Lieutenant General G. M. Shubnikov and, finally, a monument to Yuri Gagarin. Also, the first cosmonaut gave his name to the street leading from the airport to the town.

A number of squares and green parks in Baykonur also bear the names of great people associated with space exploration.

A detailed model of launch vehicle Soyuz is a real pride of Baykonur. It is placed on a reinforced concrete pedestal and tilts towards the horizon.

The town’s another attraction is the Academician Korolev Museum. It was organized in a house where the scientist used to live when he visited the Space Center.

The town of Baykonur also offers diverse souvenirs and books telling about the town and the cosmodrome.