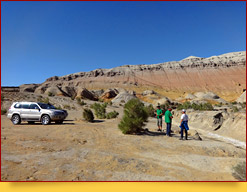 If you are an  outdoor activity  fan with  thirst for adventure, have  a pioneer spirit and  you are ready to  explore  incredible and  mysterious places in Central Asia,  then you  should  certainly be on your way  to  Kazakhstan, or more specifically  in the Almaty region, in the Altyn Emel National Park.

The park, created in April 1996 to preserve unique natural monuments, as well as rare and endangered plant and animal species, is one of the most unusual and picturesque geological parks in the world. The diversity of primeval and    spectacular landscapes, the richness of fauna and flora  are able to amaze even experienced travelers who   are not so easy to surprise. The park has a poetic name Altyn Emel, which means in  translation from Kazakh language “golden saddle”. It owes its name to the shape of one of its mountain ridges that  reminds   a horse saddle. In the rays of the southern sun the ridge covered with yellowed grass does look like  solid gold.

The Altyn Emel park, located in the Ili Basin,  has  an area of more than 536 hectares. From the north and west the park is framed by  the Dzungarian Alatau spurs; in the south it is limited by the Kapchagay reservoir and the Ili river; and in the east, the Kokterek River serves as a natural boundary. The violent volcanic and tectonic activity that took place over hundreds of millions of years in the park, as well as erosion processes created its unique relief: rocky gorges, chalk mountains, bizarre canyons, aeolian and rocky plains. 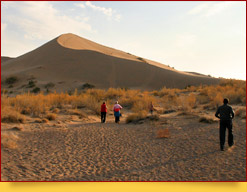 A lot of amazing surprises are waiting for you in the Aktau Mountains situated in the eastern part of the national park. "Aktau" in Kazakh means "white mountain", but in fact, the mountains are colourful. They consist of  sedimentary deposits formed in different geological epochs at the bottom of a huge ancient lake, and have shades of white, green, red and other colors. Deposits  got their bright color due-to clays and sandstone, which  interspersed with various gems, such as jasper, quartz and carnelian. Walking up on  mountain paths in the Aktau  you will be astonished by the  talent of two brilliant artists:  the Water and  the Wind. They created this  natural splendor by having  adorned the cliffs  with intricate carvings and having cut narrow bizarre canyons inside the rocky mountains. The Aktau  has  more things to surprise though. It stores  unimaginable  treasures - the most ancient  flora and fauna fossils. It is hard to imagine that giant rhinoceroses, mastodons, brontoterias, crocodiles, turtles and other ancient animals used to stroll  here in abundance.

Another natural phenomenon that an inquisitive traveler not  only be able to   see  in  the Altyn Emel Park but also to hear is the Singing Dune Aigaykum. The Dune is situated in the valley between the  rocky mountains of Big and Small Kalkan. To find  an enormous  sandy hill  in  a such place  is really puzzling because around there is no other sand deposits.  In fact, it turns out that a strong wind that often blows here is to blame for the Dune appearance. For thousands of years, it has been raising sand particles  into the air from the sandy shallows of the Ili River, which flows nearby. Then wind has been sucking them into a corridor formed between the mountains serving as a wind tunnel. Subsiding at the foot of the mountains, it  has  been dropping sand particles, where they remain to lie. The singing of the dune also has a simple explanation. Atmospheric pressure changes or  friction forces that appear when  somebody is walking  along the dune make sand to  start moving. The more the sand particles move, the more intense the sound is. Everyone who touches the Dune is able to play this natural musical instrument, provided that the sand is completely dry. Before leaving this part of the park, go down to the foot of the Small Kalkan, here you  will be able to  quench a  thirst with cold mineral water  from a curative spring. They say a famous  traveler and explorer of Central Asia, Shoqan Walikhanov also stopped here to drink  water and to have a  rest  in the shadow of  the trees. 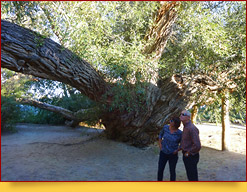 In the park there is  another place of particular value. In a small oasis in the tract of Kosbastau you will find a beautiful  turanga grove. In the middle of it  there is  a forest ranger check-point  and next to it a huge gorgeous  tree - the famous  700-year-old willow. The size of the willow is impressive. It takes several people holding hands to grab around its trunk. The tree  is considered sacred, and according to legend,  anyone who damages  its bark or breaks  its branches   will invite a bad luck. There is another legend that  associated with the tree. It says that in the XII century Genghis Khan and his soldiers halted  under this tree during the military  campaign in Central Asia. There are many other places in the park that legends link with his name. For example, according to one of them,  the Singing Dune became the  final resting place of  Genghis Khan, and it is  his tormented  soul   has been singing  sad and mysterious songs for centuries.

This is only a small part  of wonderful places  that can be seen here. In the Altyn Emel park, there are many more secrets and mysteries that will be revealed only to those who have desire and the time to explore this astonishing place.

Holidays in Uzbekistan
for New Year 2020