The Uzbek traditions of artistic carving in ganch 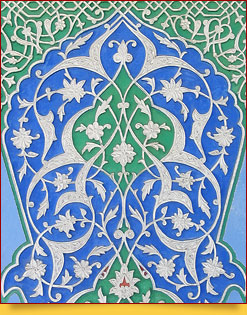 Working in ganch is so delicate and scrupulous it can be compared to the art of a jeweller. Patterns in this wonderful style adorn the interiors and exteriors of a widest range of buildings, from historical monuments through to modern exhibition, cinema and concert halls, theatres and fountains across Uzbekistan.

What is ganch?
Ganch (gaja, arzyk or clay gypsum, plaster) is a mixture of gypsum and clay widely used across Central Asia to create décor in relief (fretted ornaments, lattices, sculptures, bas-reliefs and others).

Ganch is hard and, at the same time, malleable and plastic. In these aspects this material is superior to stone and wood. The hot and dry weather of Uzbekistan ensures the immediate hardening of the solution, which facilitates an artisan’s work and makes ganch carving highly popular in the country.

How masterpieces are created
Before starting to work the artisan purifies and bakes the material and blends it with other ingredients.

After that the wall that is to be the field of artwork is covered with two layers of the solution. The first one becomes hard and monolithic in a few minutes, while the second layer for quite long remains soft as plasticine. The artist uses this second coating as a base for the pattern preliminarily drawn on a piece of paper. The next stage is the scrupulous and very careful carving of an ornament with the help of a scalpel, knife, scrapers and other special instruments. The final phase is the painting of the relief.

From the history of artistic ganch carving
Peoples that inhabited the territory of present-day Uzbekistan in the early Common Era were the first who detected the unique properties of ganch and began using them. Initially, ganch was used to plaster walls and bind bricks in brickwork. However, quite soon some smart people learnt to use it in decoration.

The images carved in alabaster that archaeologists found in the parlour of the Toprak-kala fortress in Khorezm were dated to the 3rd-4th century AD, while fragments of a plant ornament at the Varakhsha archaeological site near Bukhara are referred to the 6th-8th century. 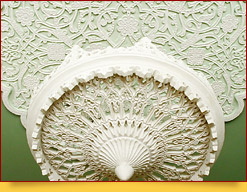 The art of ganch carving reached its peak in the medieval period. In the 18th-19th centuries this type of decorative design was highly popular across Mawarannahr (Greek: Transoxiana or Transoxania; the historical name of the area between the Amudarya and Syrdarya rivers; today’s Uzbekistan, Tajikistan, southern Kyrgyzstan and southwest Kazakhstan), where it was used both in the exteriors and interiors of palaces, royal tombs and mosques. That was the time when the art was evolving most rapidly, with a large number of new carving techniques and methods and a great variety of unusual patterns and ornaments developed.

In the late 19th-early 20th centuries the centres of ganch carving art in Uzbekistan were Khiva, Bukhara, Tashkent, Samarkand and Fergana. By 1920 Andizhan, Namangan, Margilan and Kokand had also been included in this list of cities.

Just as any other type of art, the artistic ganch carving was impacted by historical events that took place in the territory of Mawarannahr. Central Asia was a place where two great cultures blended - the Hellenistic culture brought there by the Greeks who settled down in the territory in the antique period and the Islamic one which came together with the Arabs in a later period. All this was reflected in the traditions of decorating the interiors of buildings. The Hellenistic period is characterised by images such as the winged horse, tiger, osprey and others carved in ganch, which perfectly matched oriental motifs. Geometric and plant ornamental patterns began to predominate in the Islamic period, since the new religion prohibited the depiction of humans and animals. In time these patterns became inherent in the Islamic art and are widely used until today.

Traditionally, masters in ganch carving known as ganchkor used to live compactly in special urban quarters to be able to exchange experience, hone their skills and convey their knowledge to younger generations. This resulted in the development of a wide range of artistic methods of ganch carving, among which are the carving with a coloured background, low-relief carving and openwork carving with a mirror background.

Ganch carving methods and techniques most popular in Uzbekistan:

Usually, masters use several methods and techniques at once. In Uzbekistan, fine ganch carvings quite often go in combination with various types of graphic art, such as painting and drawing.